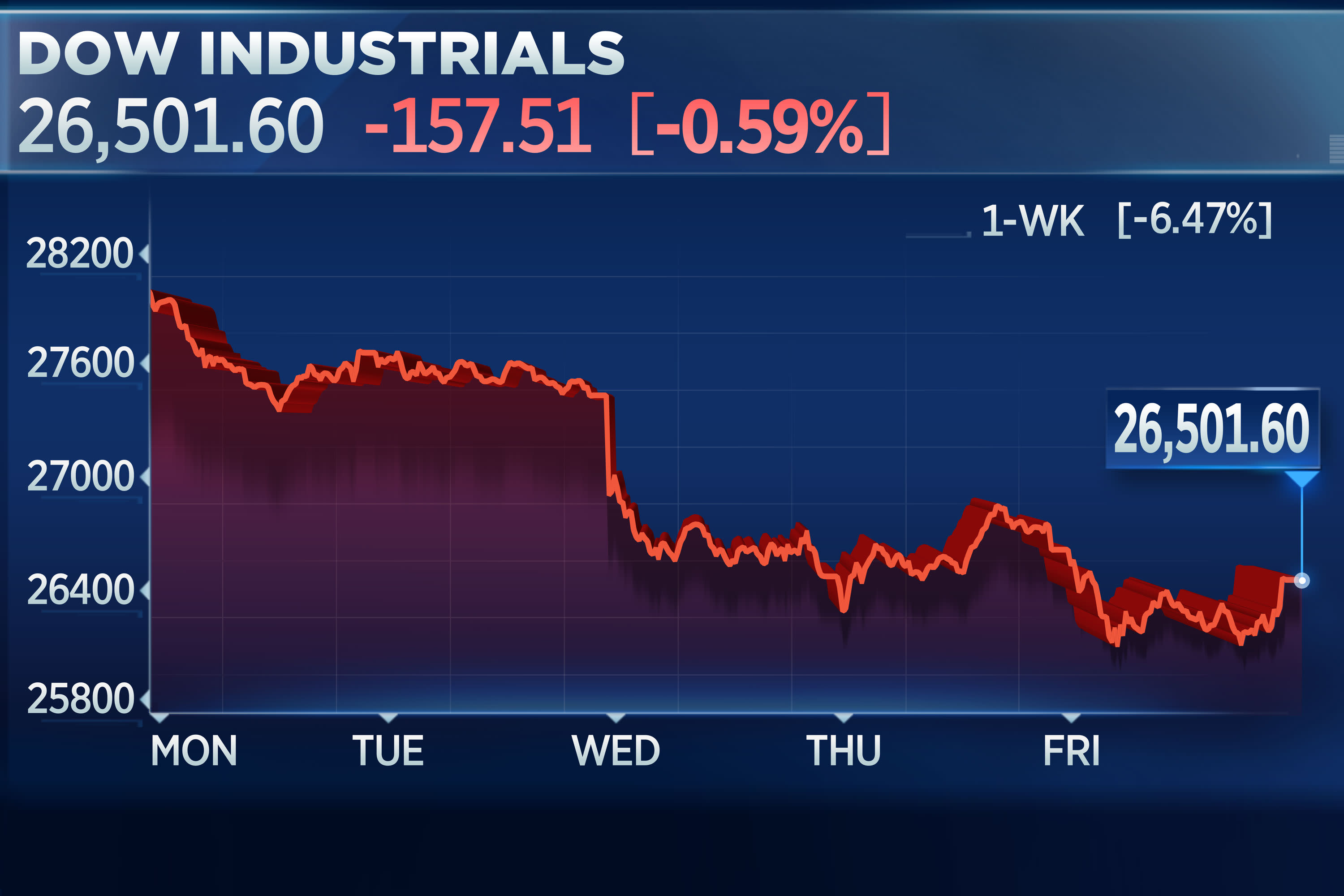 Stocks fell on Friday, led by major tech shares, as Wall Street wrapped up a difficult week in which coronavirus cases rose, U.S. fiscal stimulus talks broke down and traders braced for next week’s presidential election.

The Dow and S&P 500 are down 7.5% and 6.4%, respectively, for the week and were on track for their biggest weekly losses since March. The Nasdaq has lost more than 6% over that time period and was also headed for its worst one-week performance since March.

Those weekly losses came as the seven-day average of new coronavirus cases in the U.S. hit an all-time high this week, according to data from Johns Hopkins University. In Europe, Germany and France announced new lockdown measures to curb the virus’ spread.

“Massive policy stimulus, positive medical developments and high hopes for a return to pre-pandemic economic activity levels have provided a solid boost to equity markets,” strategists at MRB Partners wrote in a note. “However, mounting new economic restrictions, particularly in Europe, despite being forecastable and in lagged response to the re-acceleration in COVID-19 infections, only caught investors’ attention this week, triggering sharp losses.”

In Washington, Senate Majority Leader Mitch McConnell adjourned the Senate until Nov. 9, making it unlikely for Democrats and Republicans to reach a deal on new fiscal stimulus before the election on Tuesday. Treasury Secretary Steven Mnuchin, meanwhile, accused House Speaker Nancy Pelosi of miscasting the state of the stalled negotiations, calling it a “political stunt.”

Traders had been betting on both sides reaching a stimulus deal before Tuesday’s vote as some recent data shows the economic recovery could stall without new aid. This is all taking place as traders prepare for choppy market moves next week amid the U.S. presidential election.

The Dow and the S&P 500 are also set to post their second straight month of losses as Wall Street wraps up a turbulent October. The 30-stock average is down 5% this month, and the S&P 500 has lost 3%. The Nasdaq is down more than 2% over that time period.

US tightens visa rules for Chinese journalists amid coronavirus tensions

Vietnam’s outlook is ‘one of the brightest’ in Asia, UBS says