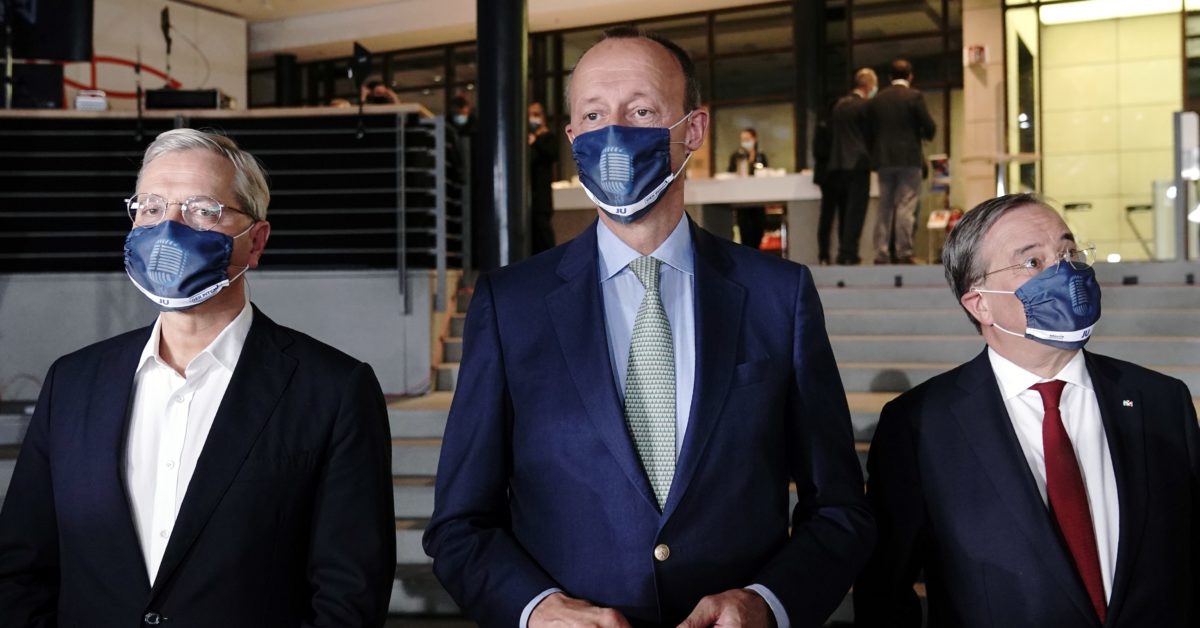 BERLIN — The contest to lead Germany’s Christian Democrats — and win a shot at succeeding Angela Merkel as chancellor — is finally getting interesting.

For months, the leadership race for Germany’s dominant center-right party, the CDU, more closely resembled a collegiate debating society than a battle for the heart and soul of the country’s dominant political force.

A marathon discussion between candidates and the party leadership Sunday over a seemingly innocuous decision on whether to delay the planned December 4 party election due to COVID-19 devolved into the political equivalent of a fistfight. While the party leadership, under Defense Minister Annegret Kramp-Karrenbauer (a one-time hopeful to succeed Merkel until she took herself out of the running earlier this year), argued for a delay in light of the surge in coronavirus infections, the candidates were split.

By Monday evening, one of the three contenders, Friedrich Merz, took to the airwaves to accuse his main rival, Armin Laschet, the premier of North Rhine-Westphalia and a proponent of a delay, of trying to game the system. Merz claimed that dark forces in the party’s “establishment” are trying to derail his bid for the top job.

Later in the day, he added more fuel to the fire, telling Die Welt: “I have clear indications that Armin Laschet let it be known that he needs more time to improve his performance.”

That kind of theater might be par for the course in many European democracies, but it’s far from normal in the consensus-driven political culture that pervades Germany’s mainstream parties. It’s especially rare in the staid CDU, a party that both prizes and preaches moderation, a quality that has helped it dominate German politics for most of the post-war period.

Even so, this week’s eruption felt somehow overdue.

Ends of eras are always bumpy and there was never any reason to think the transition after 15 years of Merkel’s rule into whatever comes next should be any different.

As such, the CDU leadership vote, originally slated for last April but due to the pandemic postponed until the regular party convention on December 4, was bound to include some fireworks. It was also inevitable that Merz, a one-time rising star in the party who disappeared into the shadows after getting steamrolled by Merkel a generation ago, would be the one holding the matches.

A corporate lawyer with few friends in the CDU’s upper echelons, Merz has painted himself as the prodigal son who is returning to restore the party’s conservative honor. That message resonates with many in the CDU base who accuse Merkel of sacrificing the party’s ideals in order to dominate the squishy political center. Though her strategy has been successful at the ballot box, critics argue it has exposed the CDU on the right, as evidenced by the rise of the populist Alternative for Germany, and eroded the party’s conservative identity.

Merz, who ran an unsuccessful leadership bid two years ago against Kramp-Karrenbauer, has targeted his appeal squarely at the party base.

That’s because he knows the only way he can be propelled to victory is massive pressure from below. In contrast to most other major German parties, the CDU does not give its rank-and-file a direct say in the leadership contest. The decision will be made by 1,001 delegates, most of them party functionaries from Germany’s 16 regions.

About one-third of those delegates hail from North Rhine-Westphalia. As it happens, all three candidates — alongside Laschet and Merz there’s Norbert Röttgen, chairman of the German parliament’s foreign affairs committee — come from the state.

But as premier, Laschet has a distinct advantage: the power to dole out political favors to the very delegates who will be casting votes.

Laschet also happens to be Merkel’s favorite. And as Merkel would likely do in his shoes, he stayed calm amid the fray, insisting that his only motivation is to do what is best for public health.

By all rights, that should be a winning strategy, given that 80 percent of Germans say they want a continuation of Merkel’s centrist path, which is exactly what Laschet has promised.

The only problem is that he trails Merz by a wide margin among CDU voters. Merz leads the field with 45 percent, followed by Laschet with 24 percent and Röttgen with 13 percent, according to a poll published by RTL, a commercial broadcaster, over the weekend.

That same poll highlighted another problem for all three: More than half of CDU members believe Bavarian premier Markus Söder, the leader of the CDU’s sister party, the Christian Social Union, has a better chance of winning the general election than any of them (though no CSU candidate has ever succeeded in doing so).

The CDU, as the larger of the two parties, will have the final say. And Merz has made it clear that he’s not just running to lead the CDU.

If he can prove that he can beat the party establishment at its own game, his candidacy for chancellor would definitely get a boost.

But it’s a risky strategy. A Merz victory could split the party. The Merkel crowd is unlikely to ever warm to him, much less forgive him for disrupting her legacy. It would also be more difficult for the CDU to secure a coalition with the Greens — widely considered the most likely outcome after next fall’s election — if the party is led by the conservative, whose previous employment in the financial world and controversial soundings on social issues have been met with skepticism by many on the left.

Given how the CDU chooses its leader, Merz still has a steep hill to climb. His decision to so aggressively break with the party’s conventions by making unsubstantiated accusations against Laschet has rubbed even some of his supporters the wrong way. Others worry he has simply lost it.

If nothing else, he’s shaken German politics out of its long corona slumber.

The ‘second liberation’ of Rome

French magazine under investigation after depicting lawmaker as slave