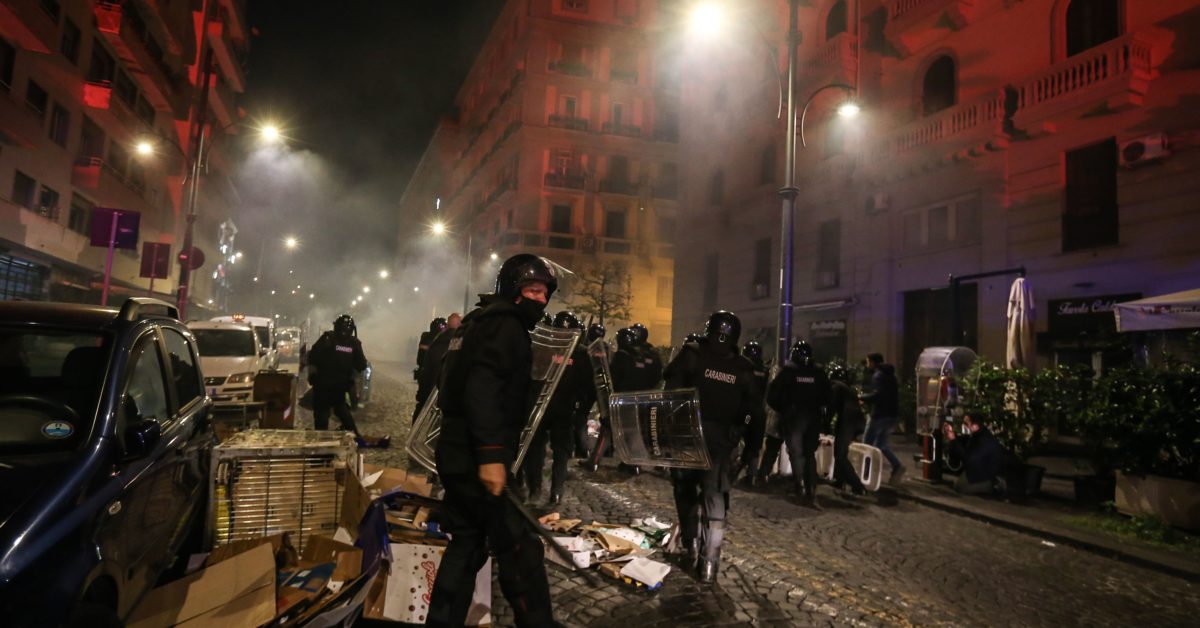 ROME — The Italian mafia are doing all they can to prevent coronavirus from harming their business — including orchestrating violence at anti-lockdown protests.

According to Italian authorities, the mob planned and directed demonstrations in Naples that descended into violence and attacks on police on Friday. Similar protests have taken place across the country for the past four days, with bar and restaurant owners expressing concerns that tighter measures, brought in by the government to counter a surge in coronavirus cases in the country, will destroy their businesses.

While the economic turmoil caused by the crisis has presented opportunities for the mafia to snap up stricken firms, curfews and lockdown restrictions are bad news, because increased police checks curtail the mob’s freedom to operate. Police estimate that with the closure of nightlife in Italy, the Camorra mafia’s drugs revenue will be hit by as much as 60 percent.

On Sunday, Prime Minister Giuseppe Conte announced a further tightening of measures including a 6 p.m. cutoff for bars and restaurants serving customers. Campania, Lazio and Lombardy — the three regions with the most coronavirus cases in Italy — have adopted a nighttime curfew in an attempt to slow the pace of contagion.

At a protest in Naples on Friday, police identified known members of four Camorra mafia families who are thought to be directing violence. Protesters threw rocks at police as well as attacking officers inside their cars and damaging the vehicles with clubs. Several journalists were also assaulted. Vincenzo de Luca, the regional governor, described the events as “guerilla warfare”.

The chief anti-mafia prosecutor, Federico Cafiero De Raho, told local paper Il Mattino that “200 scooters followed the demo and then after an agreed signal, unleashed the attack on the authorities.”

“The violence was of a level of intensity that is not the behavior of restaurant owners nor business nor workers,” he said, adding that peaceful protesters were joined by members of the far right and anarchists. “What happened represents a real, tangible attack on the state.” De Luca said that the protest had nothing to do with legitimate worries by businesses about the curfew brought in on Friday, and had been planned and coordinated for at least a week on social media.

Giuseppe Antoci, president of the Fondazione Caponnetto, a mafia research center, said that mob clans oppose curfews and lockdowns because increased police checks and closures affect their ability to demand extortion payments and lead to reduced drug sales revenues. “They were devastated by the first lockdown,” he said.

The mafia clans are also using the protests to foment anger a general mistrust of the state, he said. “It suits them to create a climate of conflict between people and state. They show that the state is not there for you and offer to help you. In doing so they widen their network of allies.”

“If a mob boss pays for your supermarket shop when you cannot, he becomes your benefactor,” he explained. “There is the risk that we go back 30 or 40 years to when the mafia leaders were seen as arbitrators, that resolved problems and disputes.”

Many businesses that survived lockdown will now go under if they do not get help, he said, and the mafia has hidden funds that it needs to launder by investing in legitimate enterprises. If businesses turn to mafia money-lenders, interest rates are so high that eventually they will be forced to cede part of the business to the mob. “The state needs to comes through for these businesses, fast, as if it does not, the mafia will.”

Sandro Ruotolo and Paolo Siani, both MPs from Naples, urged the government in a joint statement to help businesses and individuals struggling to make ends meet to prevent the mafia stepping in. They appealed to those who are protesting legitimately “to distance themselves from the mafia … Isolate them, identify them, stop them. Every act of violence should be condemned, never justified.”

Senator Nicola Morra, the head of the anti-mafia commission in parliament, warned that the mafia could benefit from the pandemic. “Where there is social deprivation supporting discontent is a way of building a myth, the myth of the good Camorra mafioso that protects and cares for you. In the south you still hear it said, unfortunately, that … the mafia is a good thing,” he said in a statement.

Survey: Trust in British government has dropped to lowest level in decades

Biden to require walking boot after fracturing his foot

An alliance of hip-hop musicians, writers, internationally known artists and Black activists has emerged as a driving force against censorship...