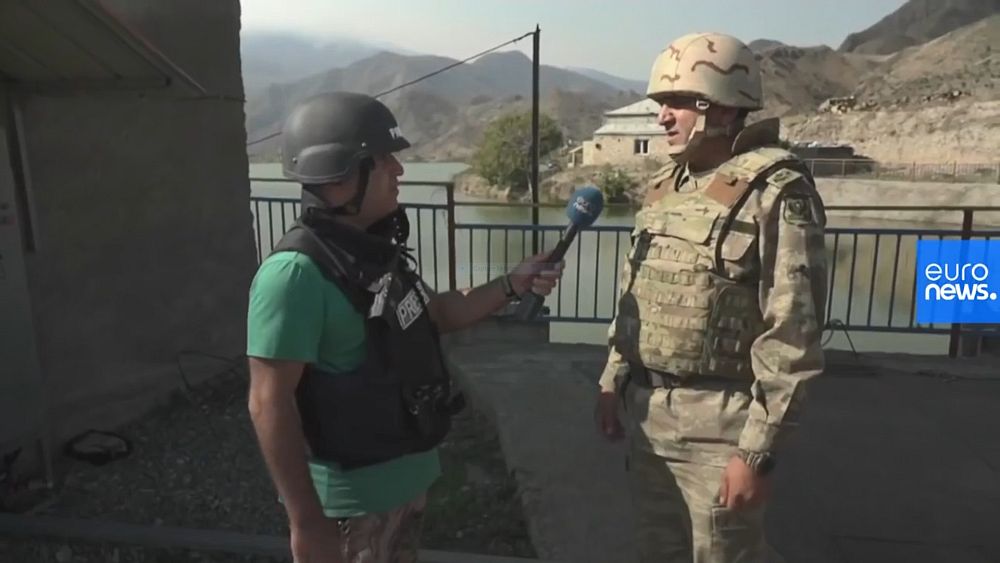 In the Martakert region of Nagorno-Karabakh, fighting has continued despite the promises of ceasefires.

The evidence of past combat is to be seen in the burnt-out vehicles lying abandoned on the roadside. The route remains treacherous.

The zone is of strategic importance because it contains the Sugovushan reservoir – or the Madagiz reservoir to the Armenians.

The dam was built to provide water supplies for farmers living in the Azerbaijani populated Terter region. The farmers claim that when Armenians took control of the dam in 1992, they diverted the water away from them.

Many are cotton growers, and they’re hoping the recapture of the dam and the water supply will improve their livelihood.

“We are now at the reoccupied water reservoir of the Sugovushan settlement,” said Azerbaijan colonel Babek Semidli.

“As a result of this water reservoir being under the control of the Armenian army, these pumps have been used to prevent [the] natural flow of water to the Terter river. Whenever the water was needed the most for irrigation purposes in Terter region these pumps would engage to pump the water back and deprive the region of Terter from much-needed water.”

Because the region is highly prized, it’s also highly dangerous. The Azerbaijani artillery is here in action – they say firing at positions from which the Armenians are shelling them.

The Euronews crew experienced the danger first hand: a rocket flew within centimetres of the jeep in which it was being escorted.

The jeep was lightly damaged by ricochets, but its passengers escaped unhurt. Many Azeris and Armenians have not been so fortunate.

The former Soviet states of Azerbaijan and Armenia fought a bloody war over the mountainous region of Nagorno-Karabakh in the early 1990s.

Thousands were killed on both sides. Hundreds of thousands of people were displaced.

The war ended with a truce in 1994, although there has been sporadic violence since as the dispute remains unresolved.

UK signs trade deal with Canada to prepare for Brexit

Bernat Solé i Barril: Reshaping the post-coronavirus world from a European point of view ǀ View

TAIPEI—Pressure is mounting on Chinese drugmakers to show clinical evidence that their leading Covid-19 vaccines work, after early data on three Western-developed shots showed promising effectiveness against the disease. Earlier this week, AstraZeneca PLC and the University of Oxford said their vaccine candidate was anywhere between 62% to 90% effective, joining two other Western...

LIMA, Peru—Peruvian politician Humberto Acuña was convicted of bribery committed while he was governor of a northern Peruvian state from...

WILMINGTON, DE - NOVEMBER 19: President-elect Joe Biden answers a reporter question after he delivered remarks at the Queen in...

U.S. Treasury yields were little changed on Wednesday after the Dow Jones stock index broke the 30,000-point mark in the previous session, as investors sought to take on more risk amid increasing political certainty and coronavirus vaccine developments.The yield on the benchmark 10-year Treasury note dipped slightly to 0.875%, while...

The pace of first-time filings for jobless claims picked up last week, with the jobs market showing increasing vulnerability to...

NBA may get creative with scheduling if next season boosts viewership