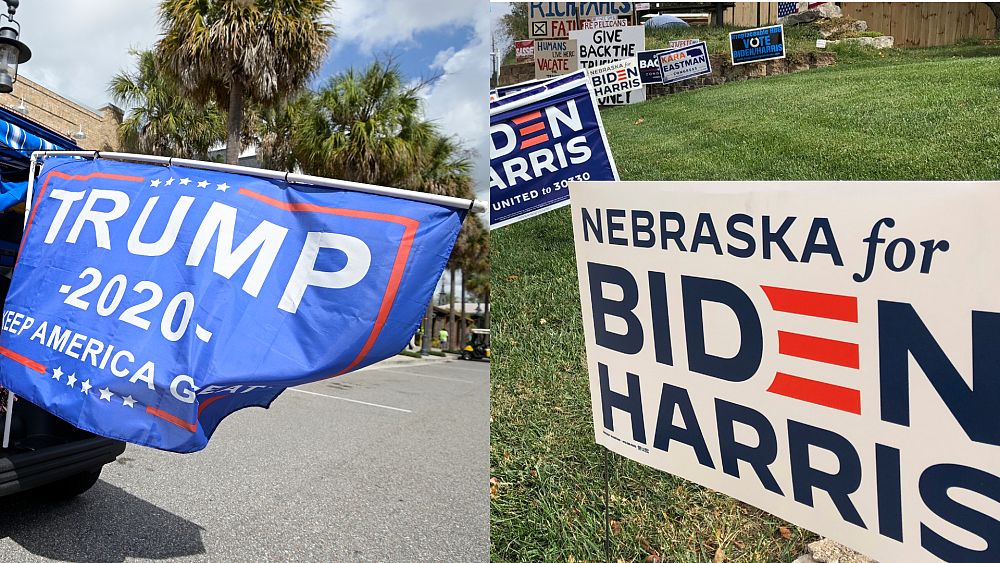 The US presidential election is gearing up to be a close race as current president Donald Trump and Democratic candidate Joe Biden fight for the country’s top post.

There’s just one week until the much anticipated showdown and the candidates have full schedules trying to win battleground states that are currently viewed as toss ups.

So what does the polling say and how does it compare to the last election?

Former US Vice President Biden has a strong lead in most national polls that have him up several percentage points over incumbent Trump.

A University of Southern California election poll released on Monday had Biden up 11 percentage points nationally, leading 53% to Trump’s 42%.

A Investor’s Business Daily and TechnoMetrica Institute of Policy and Politics poll released on Monday also had Biden with a sizeable national lead over Trump, with the Democrat up 7 percentage points.

“This is the third national survey among likely voters since September that shows Biden with a 10-point lead, as Biden led Trump 52 – 42 percent on both September 2nd and September 23rd,” the university said in a press release last week.

Several polling companies also have Democrats up several percentage points ahead of Republicans for overall races including close Congressional races.

Poll aggregator FiveThirtyEight gives Democrat Joe Biden an 87 in 100 chance of winning the election but that doesn’t necessarily mean that his road to the White House is simple.

How are the candidates faring in key battleground states?

Most US states consistently vote for one or the other party yet there are several US states that are considered battleground states because the race is up for grabs.

The states where Trump and Biden have focussed their campaigns include Florida, Wisconsin, Michigan, Pennsylvania, Ohio, Iowa, North Carolina, and Arizona.

Many of these states are seen as key to winning the election.

According to the latest polls by pollster YouGov for CBS News released in the last week, Biden is leading in Wisconsin, Michigan, and Pennsylvania by between seven and ten percentage points.

There are also several states where polling in 2020 shows a closer race than many would have previously thought. Polls show a tie in Georgia, for instance, which has not voted Democratic in a presidential race since Bill Clinton in 1992.

Also in play is North Carolina which voted narrowly for Barack Obama in 2008, but typically votes right-wing. A YouGov poll for CBS News showed that Biden was up four percentage points in the state.

Iowa is also seen as a close race in 2020 after voting overwhelmingly for Trump in 2016. A Monmouth University poll had Joe Biden up several percentage points last week.

Polling in 2016 showed former Democratic candidate Hillary Clinton winning in many states that she subsequently lost.

Polls in Michigan in 2016 leading up to the election showed Clinton ahead between one and seven percentage points depending, for instance, but Clinton lost the state.

Clinton also led in 2016 polls in several states that eventually went to Trump including Wisconsin and Pennsylvania.

Currently in these states, Biden is leading by more percentage points than Clinton had been leading by at the same time prior to the election.

Clinton also led nationally in 2016 polling, with FiveThirtyEight predicting that she was more likely to win the election than Trump.

SINGAPORE — Shares in Japan were set for a mixed start as investors in Asia-Pacific await the release of a private survey of China's manufacturing activity.Futures pointed to a mixed open for Japanese stocks, with the Nikkei futures contract in Chicago at 26,490 while its counterpart in Osaka was at...