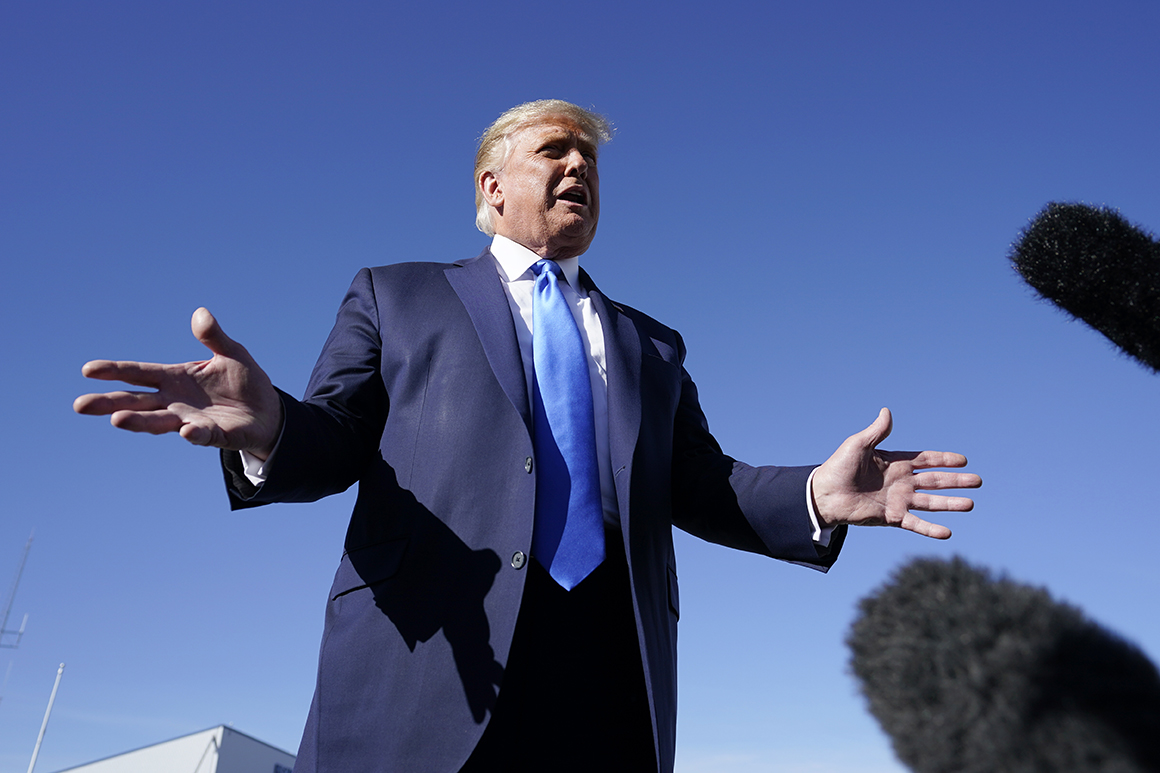 Any previous campaign in Trump’s circumstances — bad polls nationally, behind in multiple must-win states, coming after four years of low favorability ratings and steady off-year and midterm losses for the party he leads — would be facing coverage that would be the political equivalent of a hospital vigil for a very sick patient.

Veterans of past losing campaigns say that such coverage often creates its own hopeless reality. Everything an underdog candidate tries to do to change his or her circumstances is described through an interpretive filter that amounts to “check out the latest from this loser.”

In Trump’s case, however, many journalists (including the two of us on this story) emerged from the 2016 race wondering if Trump is the political equivalent of Hannibal Lecter. Sure, he’s in captivity now, but an escape may be imminent — in which case he’ll be eating pundit predictions with fava beans and a nice Chianti.

“You’re not seeing as much overt coverage of desperation quite in the same way as in the past,” said Rick Berke, a former chief political reporter for the New York Times who now is top editor of the health publication STAT. “People, after four years ago, feel like they were burned and want to leave open the possibility that he could do it again. So I think reporters are second-guessing themselves and each other in how they cover this race, and they’re being extra-cautious, and it’s understandable because they’re a little bit spooked.”

In normal times for normal candidates, the politician running significantly behind suffers from every news story starting with a dependent clause: “With time running out and supporters increasingly worried of an electoral debacle…” Or perhaps: “Amid finger-pointing among campaign aides and despair among party allies….” Cumulatively, this creates a penetrating odor of death around a campaign before the actual death arrives.

Generally, Trump has avoided this phenomenon. While there is lots of coverage illuminating the reasons he is in trouble, or even forecasting that defeat is significantly more probable than victory, the dominant storyline is far from, “Why even bother waiting for Election Day — let’s just admit this thing is over.”

Keeping an open mind is an essential journalistic trait that was underscored by the 2016 surprises. At the same time, so is the commitment to explaining to the audience what’s really going on — not diluted by timidity or ass-covering. If Trump’s stronger-than-meets-the-eye support in 2016 proves to be an anomaly, perhaps the greatest source of “FAKE NEWS!” in 2020 will turn out to be coverage that insufficiently explained how different his circumstances are now as unpopular incumbent than they were as anti-establishment disrupter four years ago.

Among those candidates who experienced the can’t-win headwind were politicians as diverse as Republican nominees John McCain in 2008, Bob Dole in 1996, or President George H.W. Bush in 1992. Democrats like Hillary Rodham Clinton, in her losing bid against Barack Obama for the party’s presidential nominee in 2008, or nominee Michael Dukakis in 1988 received similar treatment. This kind of coverage simultaneously captures a genuine reality — campaigns that weren’t clicking — and amplifies it in a way that makes it even more true.

“When you have a losing cloud over you, it’s difficult to have the sun shine through,” said Scott Reed, the campaign manager for Dole. “Just as if you’re tagged like you’re broke, you can never dig out of it, just like if your campaign is broke, it’s the same type of thing.”

“I think all of us — Democrats, the media, Republicans — I think all of us are suffering a severe PTSD from 2016 and have great fear of getting it very wrong again,” said Patti Solis Doyle, who was Hillary Clinton’s 2008 campaign manager and knows the burdens of trying to overcome adverse media narratives.

Ben Ginsberg, a veteran Republican lawyer and operative, said the reluctance of many journalists to trust their instincts about the state of the race, “helps Trump because he can hold out a sliver of hope for his supporters so they don’t give up the ship. Nobody likes a loser; you’re not going to admit you’re a loser.”

In this way, the closing days of the 2020 campaign are providing another example — after years of such examples — of how Trump has flummoxed the mainstream political media. There are likely two factors at work, both relating to the nature of Trump’s appeal to his supporters.

One was his ability in 2016 to outperform his pre-election polling in swing states (national polls captured the real state of the race, with Hillary Clinton winning the popular vote, more faithfully). Trump generated higher turnout than poll models were projecting. And he may at the margins draw support from people who are reluctant to tell that to pollsters.

Second, perhaps more important, is that the perception that the media are counting him out may paradoxically be making his supporters more motivated.

If so, that’s different than is usually the case with presidential candidates on an uphill climb. Ordinarily, said Rick Davis, a strategist in the McCain campaign, “you have to constantly tell people, ‘Hey, we can overcome this and there’s still time.”

Davis added: “Donors are the first ones who panic — they just want to know that you’re going to win, and when they smell loss coming, they’re the first ones to be affected. Then it’s the volunteers, state party chairs, people like that, your entire organization starts to melt away and that includes down-ticket guys — senators, congressmen, state legislators, governors, they all start panicking….”

Perceptions of doom are self-reinforcing. In 1988, Dukakis went on ABC’s “Nightline” that fall to try to invigorate his campaign with a sharpened political and policy message. But anchor Ted Koppel wanted to press him on scant prospects for victory. “Let’s begin with the bad news,” he started the interview, citing the latest polls. “Somehow whatever you’re doing isn’t working. Why not?”

In 1996, Dole couldn’t slow Bill Clinton’s momentum, despite lingering questions about the incumbent’s character. “Where is the outrage?!” Dole brayed.

At the same time, New York Times columnist Maureen Dowd notes that there are some political talents — Bill Clinton was one — who use media narratives that they are in trouble to advantage. Trump, in his own way, may be doing that with his frenetic travel schedule and rallies.

In family conversations, Dowd said, in the last couple weeks her own sister went from believing Trump had no chance to believing he’s got a decent shot. Quoting her sister, Dowd said, “He’s working his guts out and it’s sort of impressive.”

Jeff Greenfield, a former longtime reporter for ABC News (and frequent contributor to POLITICO), said the benefit of the doubt that reporters have given Trump seems to be wearing off in the final days of the campaign.

“I think there’s been a shift. A lot of the stories are, ‘Trump in really bad shape,'” Greenfield said. “There is a ‘to-be-sure’ paragraph, but it does seem we are getting a picture of Trump in pretty dire shape.”