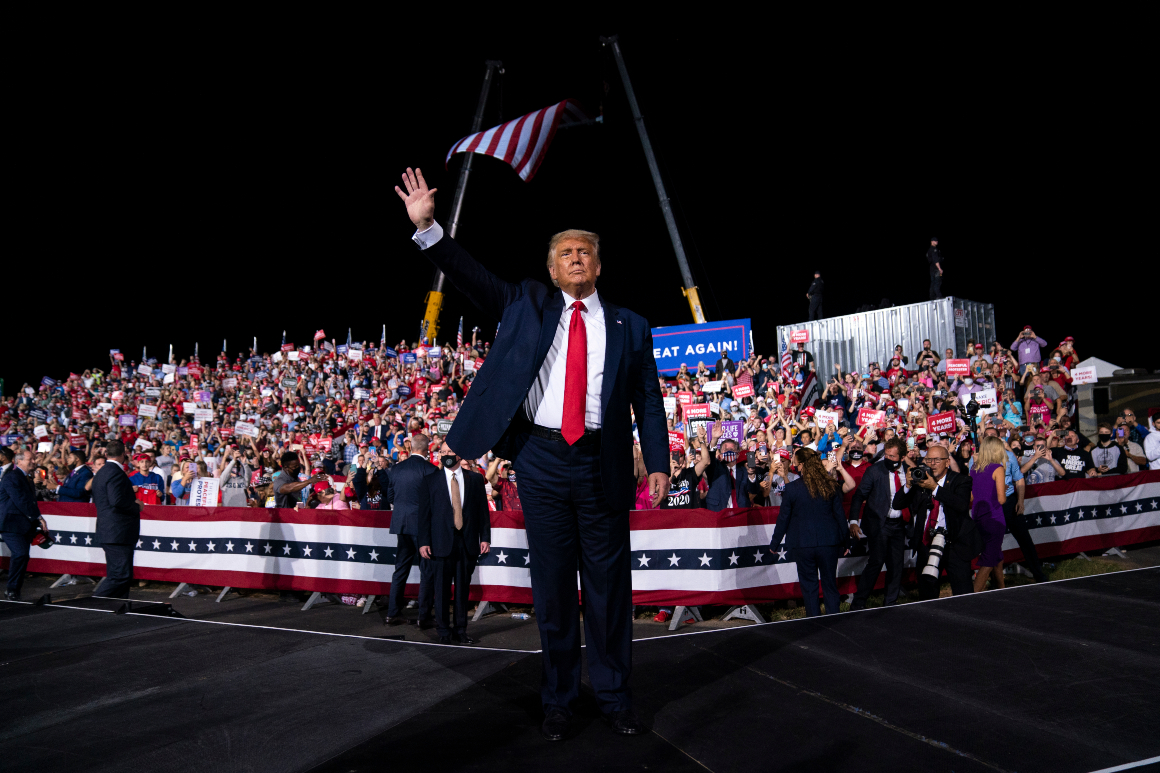 I attended one rally in Johnstown, Pa., where he famously pleaded, “Suburban women, will you please like me?” and one in Carson City, Nev., where he seemed most preoccupied with the low flow of water in modern sinks, showers and toilets, and coined the unlikely election year slogan, “Take the restrictors off!” I’ve reread many of the transcripts of these rallies and I also hit some Trump surrogate events: Rudy Giuliani in Philadelphia, Lara Trump in Scottsdale, Ariz.

Trump has largely accomplished what he set out to do in 2015. After he won the presidency, CBS’ Lesley Stahl asked Trump why he attacks the press. Stahl recalled during a talk in 2018 that Trump responded, “You know why I do it? I do it to discredit you all and demean you all so when you write negative stories about me, no one will believe you.” Trump set about creating a closed information ecosystem where he defines for his supporters what is true and what isn’t. It seemed ludicrous to me at the time that this was possible. And frankly, sometimes the incessant fact-checking of Trump seems pedantic.

Trump is occasionally lanced by outsiders who don’t realize the context of a long-running gag. In Prescott, Ariz., he told a story about calling the head of Exxon and asking for $25 million in exchange for policy favors. The bit, a regular feature of his rallies, is about how Trump could do that if he wanted but he doesn’t. A video of the fake Exxon call went viral, politicians like Rep. Alexandria Ocasio-Cortez (D-N.Y.) demanded an explanation, and Exxon put out a statement explaining that the call never happened. (That is correct; the innocent explanation here was that Trump regularly brags about how he doesn’t solicit bribes, and the reporter who tweeted the comments didn’t understand the peculiar context.)

The rallies are crucial to Trump, not just because they feed his famously insatiable ego, but because they are the main vehicle by which he “informs” his supporters what he thinks they should know that professional reporters aren’t telling them. At a Trump rally, the pandemic is almost over, a vaccine is imminent, Biden is an obvious criminal (and also mentally “gonzo”), Trump saved millions of people from Covid, he is ahead in the polls in most swing states, “the Christmas season will be canceled” by Democrats, and there is widespread fraud with mail-in balloting .

Also, there are sometimes 40,000 people waiting to get inside the rally and lines of cars are stretched out for 15 miles. The Regeneron treatment he received is now available free to anyone who wants it. Hillary Clinton covered up crimes by personally shattering multiple incriminating cell phones with a hammer. (Trump loves pantomiming the hammer during this riff.)

And the president is a big fan of most demographic groups.

“I love the Italians,” Trump said in Johnstown. (Italians are not really an important voting bloc but it allowed Trump to discuss the toppling of statues of historical figures such as Christopher Columbus.)

“I like the Hispanics,” he said in Carson City.

As the likelihood of Trump losing the election has grown, the quantity of misinformation has increased exponentially. Trump’s greatest frustration is that this sealed info bubble that he has created is no longer amplified by traditional media. Just in the last few days Trump has described the press as “dumb bastards,” “sleaze,” “crooked,” and “real garbage.” But at a Trump rally, the most privileged spot is reserved for national TV networks, which are afforded a riser in front of what the campaign seems to regard as the second-class media outlets that cover local news. Fox has started carrying the events live again, but other networks rarely do, which enrages Trump, who, even before his fundraising troubles, has needed the larger audience that cable TV brings him.

To help compensate, the Trump campaign has flooded the swing states with surrogates — mostly his children and their significant others, but also MAGA celebrities like Giuliani and Richard Grenell. Trump’s style and content has filtered down to these family members and campaign operatives as well, suggesting that whatever the outcome of this election, the Trump Effect will be a feature of our politics for a long time to come.

In Scottsdale on Tuesday, Lara Trump, the president’s daughter-in-law, spoke to a hotel ballroom packed with maskless supporters who hollered and cheered.

“The president is rubbing off on me,” she joked about a recent tweet she was particularly proud of. But he’s influenced her in other ways, too. Her explanation of the race was that the Democrats are saddled with an awful candidate who “doesn’t know where he is half the time” and an unpopular “socialist” agenda. So they’re in a jam.

“What do you do?” she asked. “You try to rig the system. You try to change an election system 90 days out. That’s exactly what the Democrats did: universal vote-by-mail.” She did not tell the crowd that there is no such universal system in America and that only a few states have adopted one. But like her father-in-law, she did make false claims about widespread election fraud, including that “cats that have been dead for 12 years — true story — are getting ballots in the mail.”

It is not a true story.

5 things to know about Valdis Dombrovskis

EU agrees sanctions on Russia over Navalny poisoning and on Lukashenko

From paintings and literature to music and film, the natural world is an inspiration to many.Its influence on architecture is also apparent, with a number of interesting developments now integrating plants and trees into their design. One example of this is the Bosco Verticale, or Vertical Forest, an Italian residential...

SINGAPORE — India's economy is expected to improve in the quarter ending in September, compared to the record drop in...

U.S. stock index futures were marginally higher on Friday morning amid low trading activity due to the Thanksgiving holiday.At around 3 a.m. ET, the Dow Jones pointed to a rise of around 12 points. Futures on the S&P 500 and Nasdaq also suggested a slightly higher open. Equity markets are due...

The new Amazon Fire TV interface, which includes user profiles.AmazonTVs have gotten really good, and a few hundred bucks can...