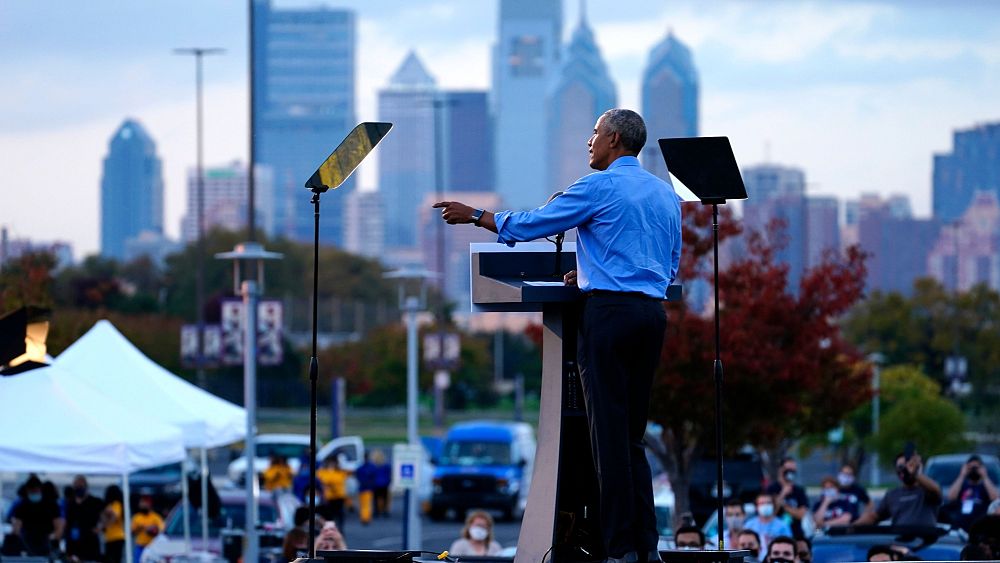 The former US president Barack Obama said “we’ve got to vote like never before” as he blasted Donald Trump’s record on the coronavirus pandemic.

Obama pointed specifically to Trump’s handling of the coronavirus pandemic, the discord evident across the nation, and his overall fitness for the job.

In a campaign rally in support of his former vice-president Joe Biden, who is facing off against Trump in the upcoming presidential election, Obama called on people to “vote like never before” and “leave no doubt” at the drive-in appearance in Philadelphia.

“America is a good and decent place, but we’ve just seen so much nonsense and noise that sometimes it’s hard to remember,” Obama said, after accusing Trump of being “incapable of taking the job seriously” and being interested only in himself.

The US has by far the world’s highest death toll from COVID-19, with more than 222,000 deaths officially recorded.

With less than two weeks before Election Day, the rally in Pennsylvania underscored the importance of the battleground state – a state Biden has visited the most during his campaign.

Trump has also prioritised it, appearing on Wednesday in the city of Erie, where he told attendees: “Before the plague came in, I wasn’t coming to Erie. I have to be honest, I wasn’t coming. We had this thing won. And then we got hit with the plague, and I had to go back to work.”

“What we do these next 13 days will matter for decades to come,” Obama said at his rally, encouraging those who didn’t go out to vote four years ago to do so this time around.

“The fact that we don’t get 100% of what we want right away is not a good reason not to vote.”

He also used the opportunity to defend his own record.

“I never thought Donald Trump would embrace my vision or continue my policies, but I did hope for the sake of the country that he might show some interest in taking the job seriously,” Obama said.

Trump “wants full credit for the economy he inherited and no blame for the pandemic he ignored” he added.

US official accuses Hezbollah of storing ammonium nitrate in Europe