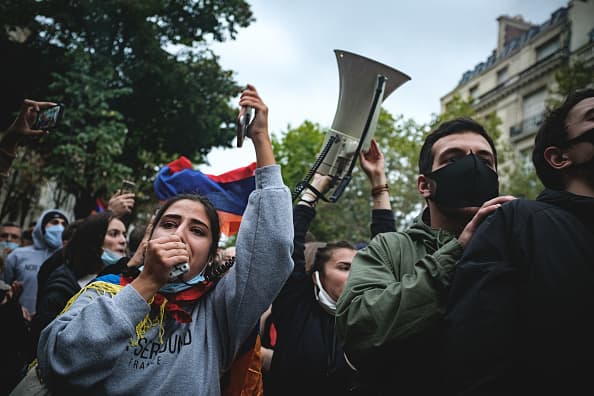 At the call of the CCAF (Coordinating Council of Armenian Organizations of France) several hundred people belonging to the Armenian community in France gathered near the Azerbaijan Embassy in Paris, France, on September 29, 2020, to protest against the war that broke out in recent days in Nagorno-Karabakh between Armenia and Azerbaijan with the support of Turkey.(Photo by )

Armenian President Armen Sarkissian issued a stern warning to the international community on Wednesday, as tensions flare between Armenia and Azerbaijan.

“The international community has to realize that if you don’t interfere now, then Caucasus will become another huge problem,” Sarkissian cautioned.

Fighting broke out on Sunday between former Soviet republics Armenia and Azerbaijan in the South Caucasus, a disputed region that provides transit routes for oil and gas to world oil markets.

The clashes in the Nagorno-Karabakh region are the worst since the 1990s. The mountainous enclave is internationally recognized as part of Azerbaijan but it has been under de facto Armenian control since the early 1990s. It declared independence from Azerbaijan in 1991.

The fighting entered its fourth day on Wednesday, with Armenia’s president saying there had been nearly 100 deaths so far. Both Armenia and Azerbaijan declared martial law on Sunday.

On Tuesday evening, Armenia’s defense ministry said that a Turkish F-16 shot down an Armenian warplane over Armenia, killing the pilot.

Turkish communications director Fahrettin Altun said the claim was “absolutely untrue,” according to state broadcaster TRT. Turkey, a close ally of Azerbaijan, has called on the “entire world” to stand with Azerbaijan.

The fighting risks involving outside players vying for influence in the region, not a new concept for the Caucasus region, which is made up of south-eastern Russia, Armenia, Azerbaijan and Georgia. The strategically important stretch of land bordering the Caspian Sea has been fought over for centuries.

Turkey has offered its full support to Azerbaijan. Ankara has also sent Syrian rebel fighters to join their forces against Armenia, The Guardian reported on Monday, citing unnamed sources. CNBC has been unable to independently verify these claims.

Armenia has described this perceived aggression as unwelcome. Many Armenians link Turkey’s support for Azerbaijan to the 1915 genocide of ethnic Armenians in the Ottoman Empire.

“If you look at activities of (the) current Turkish government, they have problems 360 degrees around them,” Armenia’s Sarkissian told CNBC.

He said Ankara faced challenges in the Mediterranean, Greece, Libya and Iraq. “They are creating problems everywhere.”

A spokesperson for Turkey’s government was not immediately available when contacted by CNBC.

Azerbaijan is the 24th largest crude oil producer in the world and supplies about 5% of Europe’s oil and gas needs, according to the IEA.

The country has three crude oil export pipelines and two main gas export pipelines, attracting international attention to the wider South Caucasus as a key artery for oil and gas from Azerbaijan into Turkey and onto wider Europe and beyond.

Despite fears this crucial infrastructure could be at risk, Sarkissian said concerns about disruption had been exaggerated.

“They are saying there’s a threat to international energy pipelines, which is absolute nonsense,” Sarkissian said. He pointed out the pipeline had been in place for 20 years and “there’s absolutely no threat to energy.”

If we had “the intention of shooting the pipeline, we’d have done that 20 years ago, but not now,” Sarkissian said.

International benchmark Brent crude traded at $40.51 a barrel during afternoon deals, down 0.6%, while U.S. West Texas Intermediate stood at $39.70 a barrel, up more than 1% for the session.

Iran’s Revolutionary Guards send warning to US, say they are increasing military patrols in the Gulf

A Tesla Model S (L) and Model X are displayed at a shopping mall in Hong Kong on March 10, 2019.Vivek Prakash | AFP | Getty ImagesTesla is recalling 48,442 of its Model S and Model X electric vehicles, which were made in the U.S. and sold to customers in...

We asked 20 medical experts with kids about their pandemic Halloween plans. Here’s what they said

Anchiy | E+ | Getty ImagesParents everywhere are grappling with how to make the most of Halloween during the pandemic.The...

Cramer’s week ahead: A tough week, a prelude to election day

Mr. Biden Will ‘Transition’ You Now