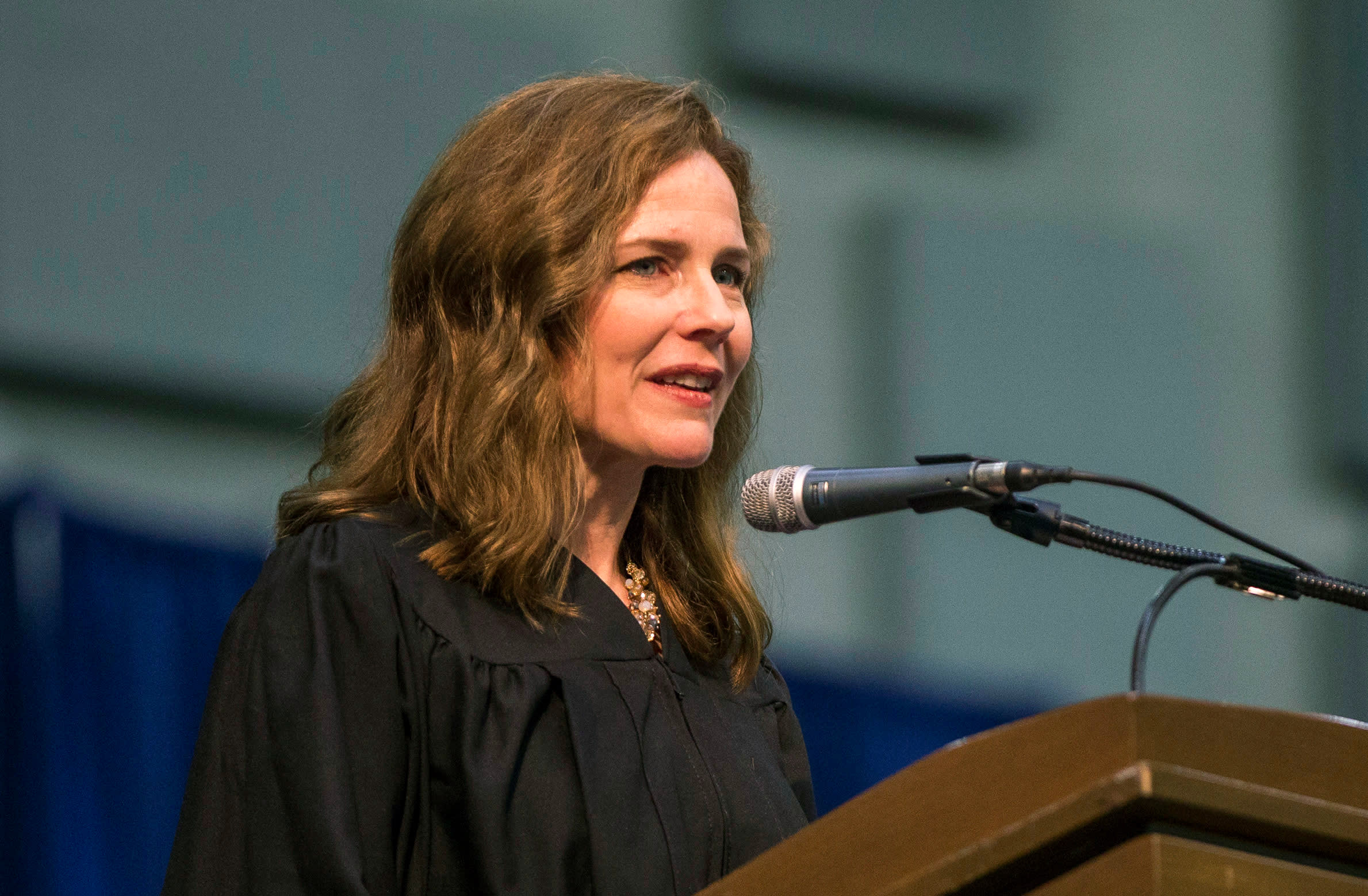 President Donald Trump’s expected selection of Amy Coney Barrett to replace Justice Ruth Bader Ginsburg on the Supreme Court has teed up a colossal clash over religion and reproductive rights to play out in the final days before Election Day.

Trump is expected to nominate Barrett on Saturday, following Ginsburg’s death a week ago from complications due to pancreatic cancer, sources familiar with the matter told NBC News.

Barrett, a devoted Catholic, is a favorite among religious conservatives and a target of those on the left who say she is likely to vote to undo the court’s longstanding abortion protections.

Trump has sought to develop his anti-abortion credentials while in office, repeatedly pushing for a late-term abortion ban during his State of the Union addresses to Congress. Trump pledged during his 2016 campaign to nominate justices who would “automatically” overturn Roe v. Wade, the landmark abortion decision.

In contrast, Democratic presidential nominee Joe Biden has moved further in favor of reproductive rights since announcing his presidential run, last year flipping his position to support federal funding of abortion via the repeal of the Hyde Amendment.

While the candidates had already staked out their positions, abortion was not one of the primary issues facing the campaigns before Ginsburg’s death. The specter of potential Barrett nomination hearings in the Senate will likely force that to change.

To be sure, any conservative judge on Trump’s shortlist was likely to inspire a fight over reproductive rights. Even before Barrett’s expected nomination, the political arm of the reproductive rights group Planned Parenthood announced a six-figure ad buy opposing Trump’s replacement of Ginsburg.

But Barrett’s past writings and statements have ensured that the fight over the future of Roe v. Wade is likely to be particularly hard fought. If Barrett is confirmed she will be Trump’s third justice on the nine-member bench and the sixth appointee of a Republican president.

Many of the battle lines were drawn when Trump nominated Barrett to the 7th U.S. Circuit Court of Appeals, where she has sat since 2017.

Liberal groups have zeroed in on a 1998 paper that Barrett co-authored with a professor while a law student at Notre Dame, which referred to aborted fetuses as “unborn victims,” and comments attributed to her by the Notre Dame alumni magazine in 2013, in which she is paraphrased as saying Roe v. Wade created “through judicial fiat a framework of abortion on demand.”

After graduating from Notre Dame, Barrett worked there as a law professor, and served on the chapter of the anti-abortion United Faculty for Life for six years, according to a questionnaire she filled out as part of her last confirmation process.

She has also been a member of the influential conservative group The Federalist Society, with which at least four of the court’s current conservatives also have ties.

From the 7th Circuit, Barrett has only considered laws governing abortion on two occasions, and in neither case wrote an opinion expressing her own views. But in both, she voted to reconsider rulings that had struck down abortion restrictions. In a third case considering a Chicago ordinance the prohibited some forms of anti-abortion protests outside abortion clinics, Barrett upheld the law, citing Supreme Court precedent.

It is not clear whether Democrats or Republicans will be more energized by the prospect of Barrett’s confirmation to take the place of Ginsburg, a reliable vote in favor of reproductive rights and an icon for feminists, particularly those on the left.

Biden has sought to turn the Supreme Court vacancy into a conversation about health care, and in particular a coming case about the fate of the Affordable Care Act.

The Supreme Court will consider the legality of the sprawling health-care law during arguments one week after Election Day, and if they strike it down, tens of millions of people are expected to lose their coverage. In her academic writings, Barrett has been critical of the reasoning Chief Justice John Roberts used to uphold the health-care law in a blockbuster 2012 case.

Even given Biden’s efforts, the focus on abortion is likely unavoidable, given the strength of the various activist groups dedicated to the topic.

Americans United for Life, a national anti-abortion group, staked out their position early. The organization’s president, Catherine Glenn Foster, put out a statement the day after Ginsburg’s death calling on Trump to name Barrett to the bench.

“It is a certainty that in the coming years, the Court will be asked to rule on questions fundamental to the functioning of our Republic, including the most important human rights question of our time: the human right to life,” she said. “We are confident that if appointed to the Supreme Court, Judge Barrett would prove herself a trusted caretaker of the Constitutional protections extended to every human person in America, including human lives in the womb.”

In a report on Barrett compiled by the Alliance for Justice, a consortium of progressive organizations, the group says that Barrett’s understanding of the law “threatens to turn back the clock on rulings about a woman’s right to make her own reproductive healthcare decisions, as well as those that protect the rights of workers, the LGBTQ community, voting rights, and many other critical rights.”

The clash over abortion was also a major factor during the confirmation hearings for Justice Brett Kavanaugh, in 2018.

Even as liberals criticized Kavanaugh’s views on reproductive rights, some conservatives complained that Trump passed over Barrett, thought to be a more reliable anti-abortion vote.

In the first major abortion case to come before both of Trump’s picks, Kavanaugh and Justice Neil Gorsuch, both men voted to uphold a Louisiana restriction that threatened to reduce the state to just one clinic. The Louisiana law was nearly identical to a Texas law the court had struck down just four years before.

Roberts, however, sided with the court’s liberals to strike down the law, delivering the necessary fifth vote. Roberts, who had voted to uphold the law in Texas, said that he was bound by the recent precedent.

The market’s post-pandemic recovery could look a lot like 2008-09, van Eck says

SINGAPORE — Shares in Japan were set to open lower as investors in Asia-Pacific monitor coronavirus developments.Futures pointed to a...

China’s electric car strategy is starting to go global – and the U.S. is lagging behind

Tesla China-made Model 3 vehicles are seen during a delivery event at its factory in Shanghai, China January 7, 2020.Aly...

New filings for jobless claims in the U.S. totaled 787,000 last week, nearly the lowest total since the early days...

US election: Key takeaways from the last Trump-Biden debate

A Good Debate, and It’s Not Quite Over

Trump comes out strong. But is it too late?