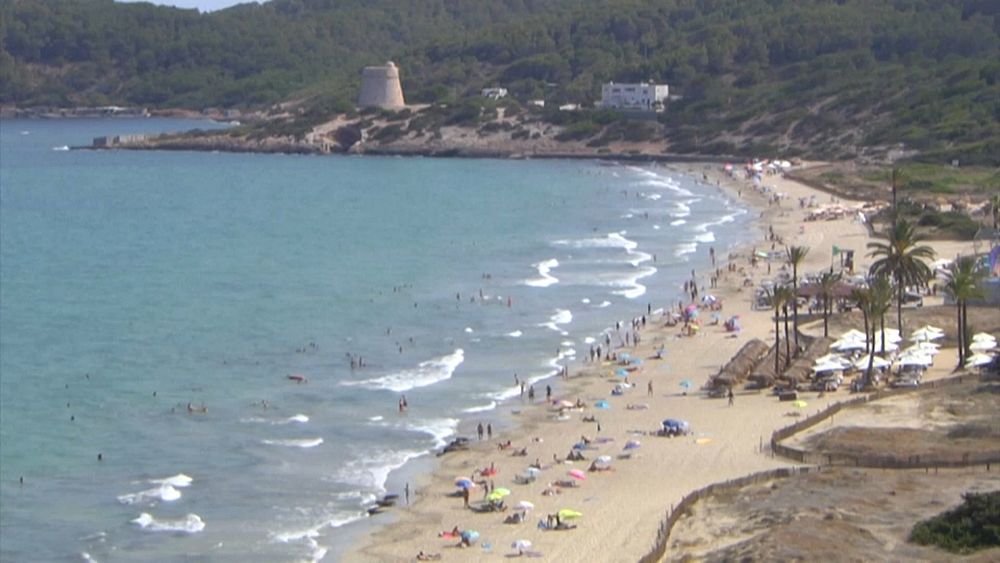 It’s not really that difficult to socially distance on a beach that’s practically empty.

Ibiza is one of the most popular destinations for partying in the Mediterranean but has become a lot quieter this year.

Like many other places in the world, the Balearic islands are reeling from the fallout from coronavirus.

Thousands of hotel rooms and apartments are unused. The famous clubs are closed. For many businesses, the season is all but lost.

It’s the worst summer in the history of tourism in Spain, a sector that makes up 13 percent of the country’s GDP, and much more on the islands and coasts.

The recent quarantine and warnings against travel made by the United Kingdom, France and Germany are a fatal blow, and one that many tourists and residents in Ibiza find hard to understand.

“It’s not needed, there are fewer cases in Ibiza and all the Balearic islands than there is in a borough of London so you know it’s a safer place to be than it is the UK,” said one British tourist.

“The amount of COVID we have had during the pandemic (in Ibiza, Formentera and the Balearic islands) the is practically negligible,” claimed restaurant owner Joan Riera.

Cases have gone up in the Balearics in recent weeks but they’re still well under control, leading many islanders to feel hard done by over governments advising people not to travel there.

They feel it is they, if anyone, who is taking a risk letting tourists in.

India cannot completely cut off its economic ties with China even though tensions between the countries have escalated in recent months, a former national security advisor to India told CNBC. Relations between the two nuclear powers deteriorated after a border clash in the Himalayas killed 20 Indian soldiers. Beijing did not...

The emblem of the International Tribunal for the Law of the Sea (ITLOS) at the court's entrance in Hamburg, Germany.Patrick...

Stocks in Asia Pacific were set to trade higher at the open as investors await the Reserve Bank of Australia's...

Trump says U.S. may have coronavirus vaccine ‘far in advance’ of end of the year

U.S. President Donald Trump arrives to speak at a news conference in the James Brady Press Briefing Room of the White House on August 3, 2020 in Washington, DC.Drew Angerer | Getty ImagesPresident Donald Trump said Monday the U.S. may have a coronavirus vaccine available to the public ahead of...

President Donald Trump is expected to hold a press briefing on Monday as Congress continues to negotiate the parameters of...