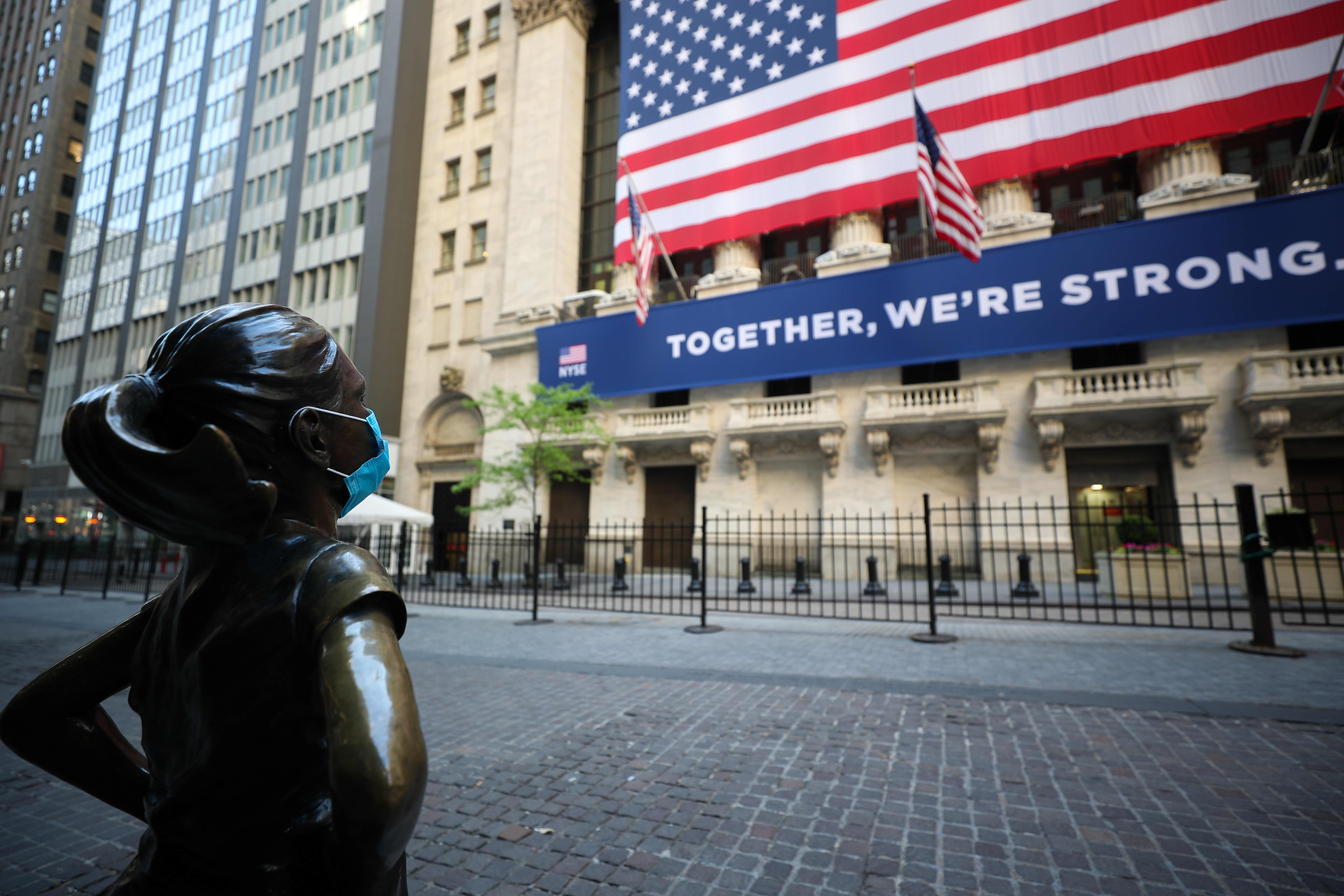 Stocks moved between gains and losses on Tuesday as a growing number of Covid-19 cases weighed on sentiment but then climbed into the close. All three major indexes finished the second quarter with their best quarterly performance in more than 20 years.

The Federal Reserve’s Main Street lending program may need some more tinkering. Fed Chairman Jerome Powell said Tuesday that “in the range of 300 banks” have expressed interest in the facility that is targeting small- and medium-sized businesses. Though Boston Fed President Eric Rosengren had said that there was strong interest in the program, Powell said there is not “a ton of interest from borrowers.” The Boston Fed is running the program. Powell said he would be open to retooling the facility if necessary. “We’ve been very willing to learn from experience and learn from what we’re hearing from different parts of the economy,” he said. – Cox

2:58 pm: Final hour of trading: Stocks rise to wrap up their best quarter in decades

The major averages were higher with roughly one hour left in the trading session as Wall Street concludes its best quarter in around 20 years. The Dow traded 30 points higher, or 0.1%, while the S&P 500 and Nasdaq advanced 0.9% and 1.4%, respectively. The Dow and S&P 500 were up 16.9% and 19.3%, respectively, for the quarter, their biggest quarterly gain since 1998. The Nasdaq was headed for its biggest one-quarter gain since 2001. —Imbert

1:30 pm: Mnuchin says economy is in a strong position to recover from coronavirus

Treasury Secretary Mnuchin said in his opening remarks to the House Financial Services Committee that the U.S. economy is in a strong position to recover thanks to steps taken by Congress and the White House.

“We are in a strong position to recover because the administration work[ed] with Congress on a bipartisan basis to pass legislation and provide liquidity to markets in record time. In addition, the PPP is keeping tens of millions of workers connected to their jobs. Economic impact payments are also helping millions of families and workers though these challenging months.” — Franck

Bank stocks bounced around on Tuesday, but most were solidly higher in afternoon trading. JPMorgan, Morgan Stanley, Citigroup and Bank of America all posted gains of less than 1% after trading in negative territory earlier in the session. Wells Fargo, which announced that it is likely to cut its dividend, was down 0.7% despite briefly trading in the green earlier in the day. — Pound

Treasury Secretary Steven Mnuchin said he expects more stimulus funding to be approved by the end of July. “We do support additional legislation and we look forward to working with the House and Senate on that,” he said during a hearing before the House Financial Services Committee. While he did not have specifics, he said the effort would be focused on “re-purposing” $135 billion that remains available under the Paycheck Protection Program for businesses still in need. The PPP has doled out $519.6 billion in 4.8 million loans and expires Tuesday. – Cox

Watch the testimony here, and we’ll be posting highlights here in the blog. – Stevens

Shares of Tesla jumped more than 7% on Tuesday, the morning after CEO Elon Musk sent an email to employees saying “Breaking even is looking super tight” for Q2. The e-mail, obtained by CNBC, did not make clear whether his break even comments were in reference to the company’s profit margin or another metric such as vehicle production numbers relative to estimates. Tesla is expected to report its second quarter vehicle production and deliveries numbers this week, before the 4th of July weekend. Shares of the electric vehicle maker have more than doubled this year, surging 158%. – Kolodny, Stevens

The Nevada Gaming Control Board said in a press release that gaming revenue was down 99.4% statewide in May, including a 99.3% decline in the Las Vegas Strip district. Revenue is down more than 19% year to date for both the district and the state. Shares of major casino stocks, including MGM Resorts and Las Vegas Sands, were mixed on Tuesday. —Pound

11:06 am: Chip stocks just had their best quarter since the tech bubble

Shares of chipmakers have rebounded sharply from their first-quarter lows, and they’re on track for their best quarterly performance since the tech bubble. The VanEck Vectors Semiconductor ETF, which tracks the 25 biggest chipmakers, is up almost 30% in the second quarter, marking its best quarter since the fourth quarter of 2001 when the exchange-traded fund gained 41%. The top performers this quarter include ON Semiconductor, Teradyne and Marvell, which have all gained more than 50% during the past three months.

Inovio Pharmaceuticals has not provided data needed to determine whether its vaccine is working, Stat, a medical news website reported Tuesday. The company put out a press release Tuesday morning claiming positive results in an early clinical trial, but it did not disclose how many patients produced antibodies that fight the coronavirus, the Stat report said. Inovio also said its vaccine candidate has been selected to participate in study as part of the government’s Operation Warp Speed, aimed at fast-tracking development of vaccines. Inovio stock is up nearly 800% year to date. It was down about 7% in trading on Wednesday morning. – Lewis

9:30 am: Stocks open last trading day of the quarter in the red

Stocks moved lower on Tuesday, the last trading day of the month, the quarter, and the first half of 2020. The Dow Jones Industrial Average shed 87 points, for a loss of 0.3%. The S&P 500 was down 0.10%, while the Nasdaq Composite slid 0.06%. Still, the record rebound from March’s low has the major averages on track for their best quarter in years. The Dow and S&P are on pace to post their largest quarterly gains since 1998, while the Nasdaq is on track for its best quarter since 2001. – Stevens

9:25 am: Investors must stay ‘cautious and selective,’ says portfolio manager

Katerina Simonetti, senior portfolio manager at UBS Private Wealth Management, said that with the number of Covid-19 cases rising, there’s considerable uncertainty in the market and investors therefore need to be “cautious and selective” going forward. She believes volatility will persist for several months, and that risk-averse investors should consider diversifying their portfolios by adding gold. “We see opportunities in companies that enable and benefit from digital transformation, e-commerce, fintech, genetic therapies and food. Companies in factory automation and robotics are also set to benefit, as industrial firms are planning to shorten global supply chains,” she said. UBS’ base case forecast sees the S&P 500 trading around 3,300 by December. – Stevens

Stock of Inovio Pharmaceuticals was down more than 12% in early morning trading after the biotechnology company said its coronavirus vaccine candidate showed positive results in early clinical trials. Additionally, its vaccine candidate, INO-4800, has been selected to participate in a non-human primate study as part of the government’s Operation Warp Speed, aimed at fast-tracking development of vaccines. Inovio stock is up more than 860% year to date. – Lewis

9:01 am: Goldman Sachs says a mask mandate could save economy from a 5% hit

Shares of Conagra Brands jumped more than 3% during premarket trading after the company’s fourth quarter results beat analyst estimates. The food producer posted a quarterly profit of 75 cents per share on an adjusted basis, which was nine cents ahead of estimates. Revenue also topped expectations, and the company gave upbeat guidance as the coronavirus pandemic has led to elevated demand. Shares have gained 19% in the last three months. – Stevens

8:07 am: Some banks stay silent on capital plans, dividends

On Monday night, major banks announced their dividend plans and stress capital buffers following the Federal Reserve’s stress test. However, some smaller banks have not reported their plans. PNC Financial has not filed  an update with the Securities and Exchange Commission, according to the regulator’s website. Capital One reported its stress capital buffer but did not mention dividends in the press release. —Pound

7:49 am: Powell and Mnuchin to testify before the House Financial Services Committee

Federal Reserve chair Jerome Powell and Treasury Secretary Steven Mnuchin will testify before the House Financial Services Committee at 12:30 p.m. on Tuesday. The joint hearing will address the Fed and Treasury’s response to the coronavirus pandemic. In remarks prepared ahead of the hearing, Powell said that despite a recent uptick in economic activity as lockdown measures are eased across the world’s largest economy, the outlook is “extraordinarily uncertain” and will rely on both containing the virus and government support for the recovery. “A full recovery is unlikely until people are confident that it is safe to reengage in a broad range of activities,” Powell said. “The path forward will also depend on the policy actions taken at all levels of government to provide relief and to support the recovery for as long as needed.” –Li

7:38 am: Biden tells donors he will scrap most of Trump’s tax cuts

7:30 am: Micron shares jump after earnings

Micron traded more than 5% higher in the premarket after the chip manufacturer posted better-than-expected results for the previous quarter. The company posted an adjusted profit of 82 cents per share, topping a Refinitiv estimate of 77 cents. Revenues rose to $5.44 billion, beating an estimate of $5.31 billion. Micron also issued better-than-expected revenue guidance for the current quarter. —Imbert

7:25 am: China says its manufacturing sector expanded in June

Chinas’s official Purchasing Manager’s Index came in at 50.9 for June, beating expectations and showing a growing sector. The expectation was for a reading of 50.4, according to economists polled by Reuters. In PMIs, readings above 50 represent expansion. A private survey PMI from Caixin and IHS Markit is scheduled to be released later this week. — Pound, Tan

7:20 am: FedEx rises ahead of earnings

Shares of FedEx rose 1% in premarket trading as the company prepares to release its fourth quarter earnings results after the market closes on Tuesday. According to consensus estimates from FactSet, analysts are expecting the company to earn $1.58 per share on $16.41 billion in revenue. In a recent note to clients UBS said it’s expecting a “very weak” report for the shipping company, although the firm still has a buy rating on the stock.  “FDX’s potential for multi-year margin improvement and EPS growth can make it attractive to investors,” UBS said. Shares of FedEx are down 11% this year. – Stevens

Dow futures rise 250 points after Peter Navarro clarifies that U.S.-China trade deal is not over

Stocks in Asia Pacific were mixed on Wednesday as concerns surrounding the coronavirus pandemic continued to linger. Mainland Chinese stocks built on the solid run they've had so far this week as they led gains in the region for yet another day. The Shanghai composite closed 1.74% higher at around 3,403.44...

Shoppers wearing protective face masks walk through the rain on Oxford Street in London on June 18, 2020, as some...

U.S. government debt prices were mixed on Wednesday morning amid uncertainty over the pandemic. At around 1:48 a.m. ET, the yield on the benchmark 10-year Treasury note was higher at 0.6512% and the yield on the 30-year Treasury bond was down at 1.3819%. Yields move inversely to prices. On Tuesday, long-maturity yields dropped on concerns...

9 details from the new book by Donald Trump’s niece