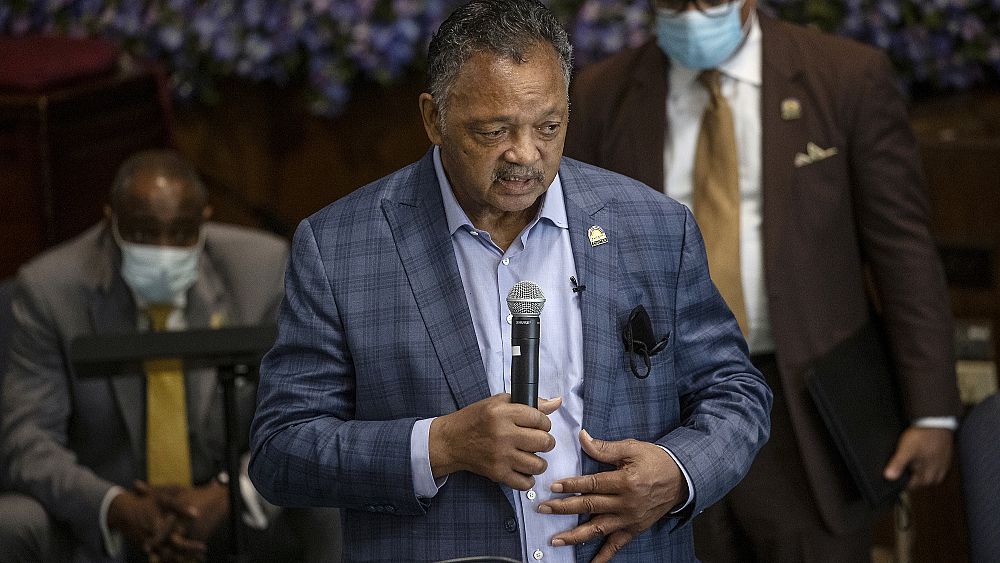 “A lot is going to change” from protests across the US against the police killing of George Floyd as the presidential election should usher in “a new climate” more favourable to social justice, American civil rights activist Rev Jesse Jackson told Euronews.

Jackson, a one-time Democratic presidential hopeful, said that “there’s power in vote, power in demonstrations” and that “come November, we will remember”.

“The election in November will have a lot to do with a new climate, a new attorney general in the disposition towards civil rights and social justice and gender equality,” he said.

“We have to hold on until the election, the morning will come. Don’t give up, don’t give up hope,” he went on, adding that “a lot is going to change from this confrontation,” he said.

Protests denounce police violence and institutional racism have been ongoing in the US since the May 25 killing of George Floyd in Minneapolis.

The African-American man, 48, died after a police officer handcuffed him and knelt on his neck for eight minutes.

President Donald Trump has responded to the protest — the largest civil unrest movement in the US since the 1960s — by threatening to send in the military.

Jackson warned however that this would only lead to “a massive fight back”.

“We’ll have to go to jail, we will resist,” he said. “Our democracy cannot give way to a police state.”

According to Jackson, the arrest of Derek Chauvin, the police officer who knelt on Floyd, constitutes the “first time in the history of Minnesota a police was arrested for killing a black”.

The civil rights activist called for the charges against Chauvin to be changed from third-degree murder to first-degree murder and argued that “he should have been fired a long time ago”.

Chauvin, 44, had been the subject of 18 official complaints during his 18 year-career at the Minneapolis Police Department.

“The police are protected from obligations by police unions and that must change,” Jackson said.

He also thanked the “the people of London, and France for making this a global struggle for racial justice and genre equality. Thank you so much.”

Thousands of people marched through the British capital on Wednesday with signs reading “Black Lives Matter” and “I can’t breathe”.

Similar protests were held across Europe, including in Paris, France, where between 20,000 and 40,000 people gathered on Tuesday evening.

Don’t be fooled by its sudden compliance. Hungary is helping to unravel the EU’s legal order ǀ View

Coronavirus: an unprecedented challenge to democracy?

Coronavirus and Islam: How to celebrate Ramadan under lockdown

Shoppers wearing protective face masks walk through the rain on Oxford Street in London on June 18, 2020, as some non-essential retailers reopen from their coronavirus shutdown. Tolga Akmen/AFP/Getty Images U.K. Chancellor of the Exchequer Rishi Sunak will deliver a fresh set of policy initiatives on Wednesday as Britain looks...

BANGKOK, THAILAND - JULY 27: A tug boat passes the Wat Arun Buddhist shrine, the Temple of Dawn, on the...

U.S. government debt prices were mixed on Wednesday morning amid uncertainty over the pandemic. At around 1:48 a.m. ET, the yield on the benchmark 10-year Treasury note was higher at 0.6512% and the yield on the 30-year Treasury bond was down at 1.3819%. Yields move inversely to prices. On Tuesday, long-maturity yields dropped on concerns...