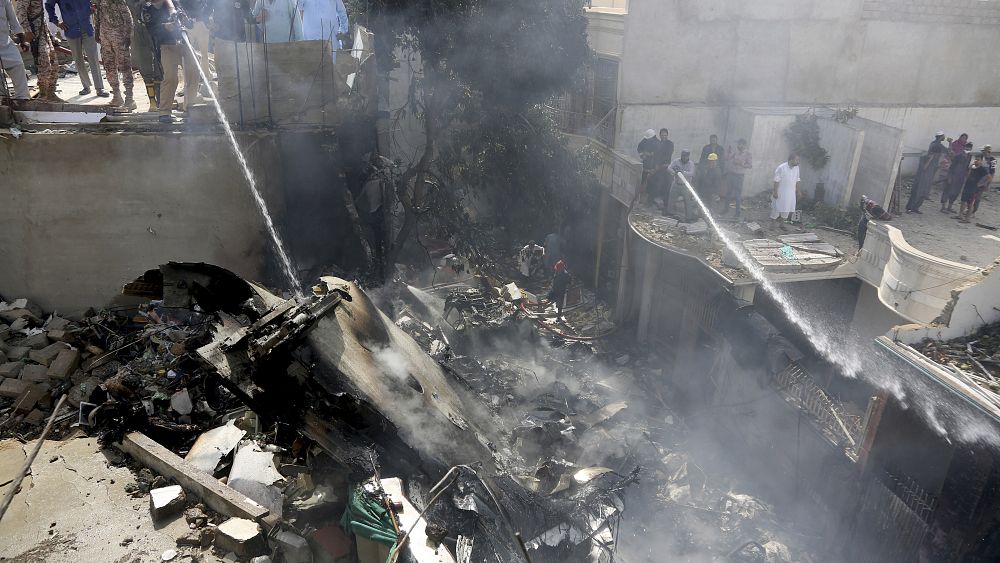 A Pakistan International Airlines plane carrying 91 passengers and seven crew has crashed into a residential neighbourhood of Karachi.

Two people from the aircraft survived the impact, according to officials, and a further 57 bodies have since been recovered from the wreckage.

It is not currently clear how many people on the ground were hurt.

The aircraft was arriving in Karachi from Lahore, a city in the country’s northeast, when it crashed in the Model Colony neighbourhood, situated several kilometres from Jinnah International Airport.

Model Colony is poor area of the city, and is heavily congested.

Many of those on board the plane were believed to be travelling to Karachi ahead of the Muslim holiday Eid al-Fitr.

Eyewitness video captured at the scene of the crash showed plane debris scattered across the floor of the area.

An aircraft door lay on the ground in one video, having hit and dented a nearby vehicle. Other vehicles were seen to be set on fire, while thick black smoke billowed in the background.

Another video showed roofs of several buildings that had been ripped off, while people were seen trying to venture toward the wall of smoke.

One journalist said a close relative of hers had been on the flight and was believed to have survived. She offered no other details.

Pakistan’s Prime Minister Imran Khan said he was “shocked and saddened” by the news, adding that he was in contact with the airline’s chief executive, who was en route to Karachi to meet the rescue teams.

He said an immediate investigation had been launched, and sent condolences to the families of those who had died.

In a later statement, Khan thanked world leaders for reaching out to expressed their condolences, and added: “The people of Pakistan value this support and solidarity in our hour of grief.”

A spokesperson for the Pakistan armed forces wrote on Twitter that a provision had been sent for “full assistance” to civil authorities working to rescue victims from the site.

It is not yet clear what caused the crash, but the pilot of the plane was heard to make a mayday call shortly before descent.

“We are proceeding direct, sir — we have lost engine,” the pilot is heard saying in the transmission uploaded to LiveATC.net.

According to flight records published by Flightradar 24, the aircraft had aborted an earlier landing attempt at several hundred feet, before making another climb.

It then lost contact with air traffic control from 525 feet.

This is corroborated by witnesses, who say they watched the plane try to make several attempts at landing before it crashed.

Porsche is working with third-party operators for more than 200,000 charging points in China.Evelyn Cheng | CNBCBEIJING – Luxury and...

This photo taken on February 20, 2020 shows doctors looking at a lung CT image at a hospital in Yunmeng county, Xiaogan city, in China's central Hubei province.STR | AFP | Getty ImagesIt started as a seemingly perplexing case of pneumonia. From a wet market in Wuhan, China, Covid-19 has spread...

Watch now: ETF Edge on busy week for IPOs and direct listings and the rise of China ETFs

How the U.S. economic response to the coronavirus pandemic stacks up to the rest of the world