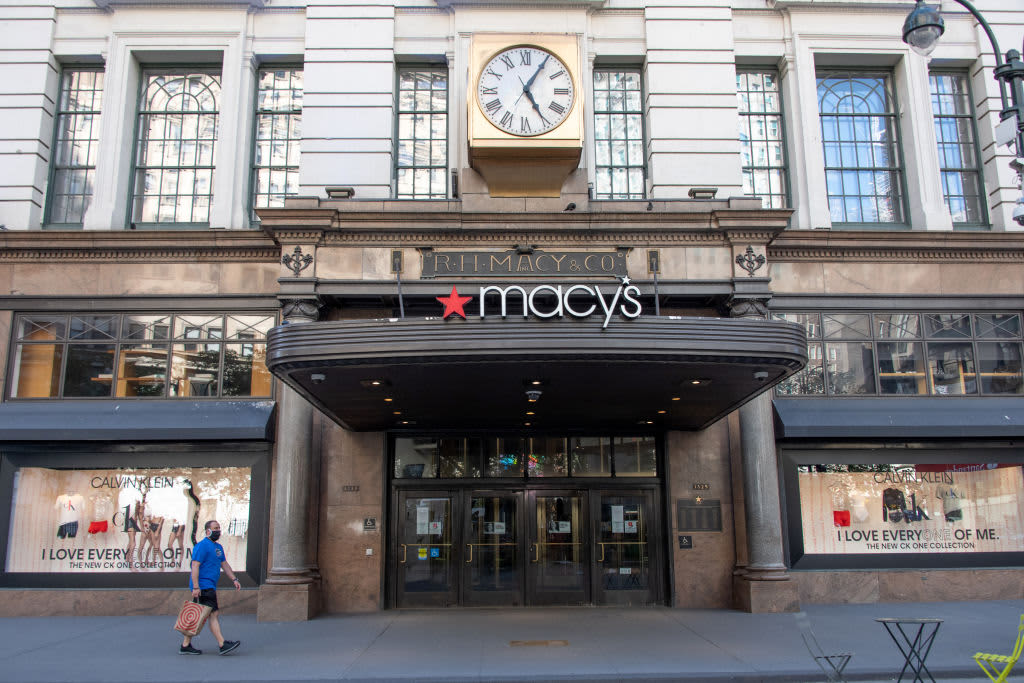 Take a look at some of the biggest movers in the premarket:

Macy’s (M) – In a preliminary first-quarter report, the retailer said it expected revenue of $3 billion to $3.03 billion for the quarter, compared to an estimate of $3.3 billion. It also forecasts a larger-than-expected loss as it continues to feel the impact of virus-related store closures. Macy’s said it expected that most stores would be reopened by late June.

Best Buy (BBY) – The electronics retailer earned 67 cents per share for the first quarter, well above the 44 cents a share consensus estimate. Revenue also came in above forecasts. Comparable-store sales fell by 5.3%, but that was smaller than forecasts of a 10% drop.

Under Armour (UAA) – The athletic apparel maker intends to sell $400 million in convertible senior notes, according to a Securities and Exchange Commission filing. The sale will be subject to market conditions and other factors.

Medtronic (MDT) – The medical device maker reported quarterly earnings of 58 cents per share, 10 cents a share short of estimates. Revenue also missed forecasts. Medtronic cited a delay in elective surgeries due to the Covid-19 outbreak and is not providing guidance due to ongoing uncertainty. The company also announced a 4 cents a share increase in its quarterly dividend to 58 cents per share.

L Brands (LB) – L Brands lost 99 cents per share for its latest quarter, wider than the 72 cents a share loss expected by Wall Street. The apparel retailer’s revenue came in below estimates as well, with Victoria’s Secret sales cut nearly in half and Bath & Body Works sales dropping 18%. All of the company’s stores have been shut since March 17 due to the coronavirus outbreak.

Expedia (EXPE) – Expedia reported a quarterly loss of $1.83 per share, compared to a consensus estimate of a loss of $1.23 per share. The travel services company’s revenue came in slightly above Street forecasts, and Expedia said it is seeing signs of a recovery in demand this month.

Take-Two Interactive (TTWO) – Take-Two beat sales expectations by a wide margin in its latest quarter, thanks to a surge in videogame activity amid nationwide stay-at-home orders. The company said its games – including the popular NBA 2K and Grand Theft Auto franchises – performed better than expected across the board.

AstraZeneca (AZN) – AstraZeneca struck supply agreements for its Covid-19 vaccine candidate currently in joint development with the University of Oxford. The drugmaker said it now has capacity for one billion doses through 2020 and into 2021.

Schlumberger (SLB) – Schlumberger will reshuffle its top executives, according to a memo written by CEO Olivier Le Peuch and seen by Reuters. The oilfield services company will also consolidate its 17 product lines into four divisions.

Canada Goose (GOOS) – Canada Goose laid off 125 workers, about 2.5% of its global workforce. The luxury outerwear maker is taking steps to cope with the impact of Covid-19 on its business.

Mastercard (MA) – Mastercard said it would allow its employees to continue to work from home until their fears of contracting Covid-19 subside. The payments processor said it was re-examining its office footprint and is considering consolidation.

Boeing (BA) – Boeing was rated “outperform” in new coverage at RBC Capital Markets. The firm notes the risks associated with the airline industry in general and uncertainty surrounding the return of Boeing’s grounded 737 Max jet, but said the stock has a favorable risk/reward profile and that the company’s defense business is undervalued.

US banks have an opportunity to be ‘heroes’ in the coronavirus crisis, fund manager says

Russian opposition leader Alexei Navalny at the Berlin hospital where he was treated on Sept. 19. Photo: /Associated Press By Thomas Grove Close Thomas Grove Oct. 1, 2020 11:02 am ET MOSCOW—Kremlin critic Alexei Navalny blamed President Vladimir Putin for his poisoning with a Soviet-era nerve agent and promised to...

U.S. stocks were little changed on Thursday to kick off a new month and quarter as investors monitored progress on...

A customer receives an order from a worker in a protective mask at the drive-thru of a McDonald's Corp. restaurant in Los Angeles, California, U.S.Kyle Grillot | Bloomberg | Getty ImagesAs consumers increasingly pick up their fast-food orders from the comfort of their car, average drive-thru times across 10 chains...

Jamie Johnson, of San Francisco, takes his lunch at Embarcadero as smoky skies from the northern California wildfires casts a...

Facebook will push more users to discover and join groups

The founder and CEO of Facebook Mark Zuckerberg speaks during the 56th Munich Security Conference in Munich, southern Germany, on...

People walk into a house for sale in Floral Park, Nassau County, New York, the United States, on Sept. 6,...

Biden and Trump Are Both Right on Antifa

People of Praise Deserves Ours