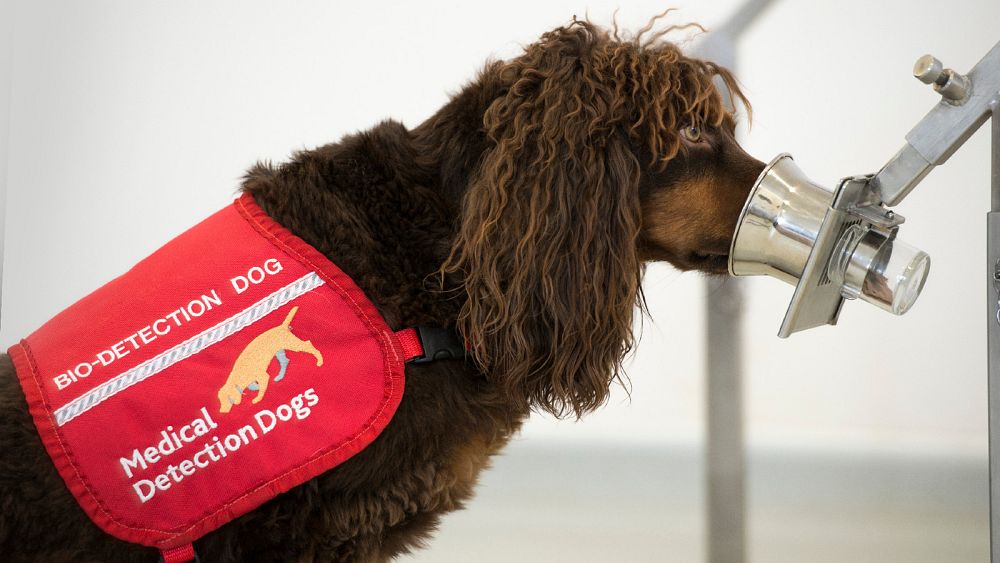 The UK Government has awarded a specialist team of researchers almost €500,000 to find out if specially trained bio-detection dogs could be used as a new rapid testing measure for COVID-19.

Medical detection dogs have a successful history catching the presence of malaria and certain types of cancers in humans. Now they’ve been given a new mission – to see if they can detect the odour of coronavirus in patients, particularly those not showing any symptoms.

The programme is a partnership between the government, the Medical Detection Dogs charity and universities like London’s School of Hygiene and Tropical Medicine. Its head of disease control, Professor James Logan, told Euronews there was a solid scientific basis for using dogs to sniff out the virus.

“When you have a disease, whether it’s a virus or a parasite, it changes the body odour so you actually smell differently. We’ve demonstrated this already with diseases like malaria for example,” he said.

“And we know for other diseases like certain types of cancers, Parkinson’s, even detection of epileptic seizures or blood sugar levels, that dogs can do this with a very very high level of accuracy.”

If the trial gathers sufficient evidence, the first set of dogs could be deployed to key points of entry into the UK within six months to assist with the rapid screening of people travelling from abroad.

In practice, that could mean at airports, each dog could screen up to 250 incoming passengers per hour.

But first, the dogs need to see if they pass the appropriate tests and training.

“Within a few weeks of beginning the training, we’ll know if there’s something there, but it will take about 8 to 10 weeks to get to the end of that process,” said Professor Logan.

“So what we’re hoping is that by August or September time, probably September time, we would have in the UK at least six dogs that would be ready to be deployed. And, we’d also have a method for scaling this up so that other countries could do the same sort of thing.”

“The dogs that we’re using in these trials are labradors and cocker spaniels and some of them are a mix of the two. They’re excellent dogs, they’re able to smell very well and use their nose very well and also able to be trained because it’s very important they have the right temperament,” he added.

US wildfires: Antifa misinformation continues to spread on social media

#DCblackout: How one hashtag sewed confusion and misinformation | #TheCube

Analysis: The search for a COVID-19 vaccine

Judge Amy Coney BarrettMatt Cashore | Notre Dame | ReutersPresident Donald Trump has selected Judge Amy Coney Barrett to fill the vacancy left by the death of Justice Ruth Bader Ginsburg on the Supreme Court, NBC News has learned. Trump is expected to make the announcement at an event planned for...

President Donald Trump's selection of Amy Coney Barrett to replace Justice Ruth Bader Ginsburg on the Supreme Court has teed up a colossal clash over religion and reproductive rights to play out in the final days before Election Day. Trump will nominate Barrett on Saturday, following Ginsburg's death a week ago...

A Supreme Court confirmation before Election Day would be quick, but not unprecedented

President Donald Trump is expected to nominate Judge Amy Coney Barrett to the Supreme Court on Saturday, sources familiar with...

As President Donald Trump moves forward with his expected nomination of Judge Amy Coney Barrett to the Supreme Court, the...

The Forgotten Front Porch Is Making a Comeback

How to Dress for a Zoom Interview, and Other Workwear Dilemmas, Solved

For young exiles, guarded hope for change in Belarus

New F1 CEO will need to address future of U.S. Grand Prix in Austin as racetrack deal set to expire after 2021 season