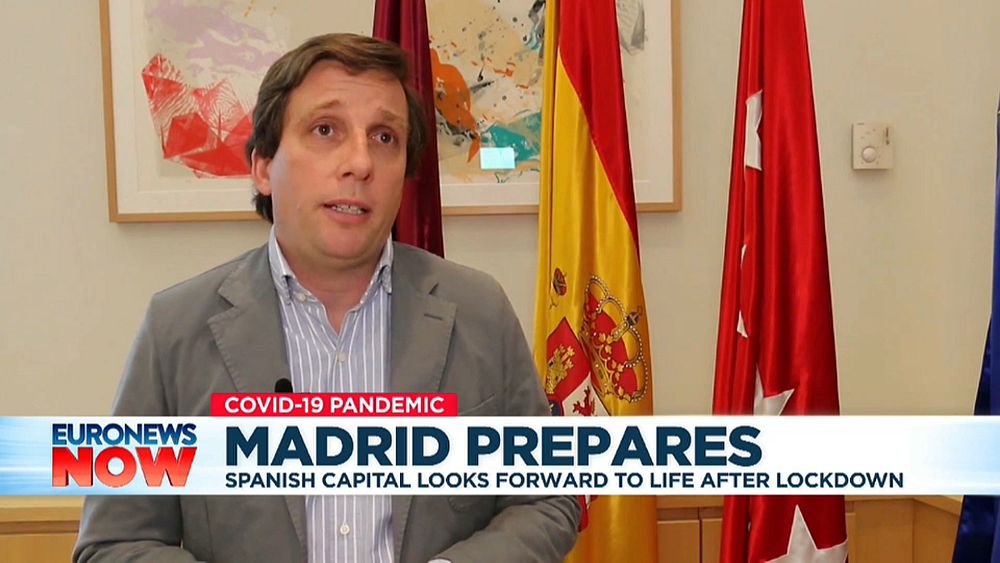 Authorities in Madrid are appealing to Spain’s supreme court over the government’s refusal to ease the capital’s lockdown.

Madrid’s regional government said it believes that technical assessments over what areas can loosen restrictions — adopted to stem the COVID-19 outbreak — are not being applied in the same way across the country.

On Wednesday Spain’s lockdown was extended for a further two weeks until June 7. Small shops have reopened in most of the country, but not in hard-hit Madrid and Barcelona. Travel between provinces remains strictly limited.

“We have all the scenarios planned for moving on from phase one because it’s important for us to be able to face up to the economic crisis and social emergency in which we are immersed,” he told our reporter, Carlos Marlasca.

For the epicentre of Spain’s coronavirus epidemic, there is still a long road ahead before normality returns. Some of the sectors that contribute most to Madrid’s GDP and generate most employment, such as hotels and restaurants, have been severely hit.

“The plan is based on one premise: security. What we have to convey to those who want to come and stay in the city and the hotels of Madrid, to all those tourists who want to come to the city, is that there is sufficient security – for them to understand that Madrid will not be an unsafe city nor will there be outbreaks,” Martínez-Almeida said.

The mayor has held meetings with his counterparts in Paris, London and Berlin to discuss how to get cities back up and running again while protecting public health, and how to introduce social distancing in normally crowded areas.

“We want to move towards a city where it is not necessary to make such long journeys, where everything can be closer together”.

Madrid has been the scene of protests against the lockdown and Socialist-led government of Prime Minister Pedro Sánchez.

Although the mayor belongs to the conservative opposition Popular Party, he has maintained a moderate attitude towards the executive. And he defends the protestors’ right to be heard.

You can watch the interview with José Luis Martínez-Almeida in the video player above.

Navalny is ‘a catalyst for Russians’ own discontent’ says analyst

France 2015 terror attacks: Who are the suspects going on trial?

House Speaker Nancy Pelosi and Treasury Secretary Steven Mnuchin failed to strike a coronavirus stimulus deal during a more than 90-minute meeting Wednesday. The pair will continue discussions as they try to craft an elusive fifth relief package that could pass both chambers of Congress, the California Democrat said in a...

Google TV software running on a Chromecast.GoogleGoogle kicked off its annual hardware event Wednesday where it announced several new products, including the...

US Senate Majority Leader Mitch McConnell (R-KY) speaks at a press conference at the US Capitol on September 22, 2020 in Washington, DC, as McConnell said in a statement that the Senate would take up President Donald Trumps nominee for the Supreme Court following the death of Justice Ruth Bader...

When o.d.o. by Odo reopens its dining room for the first time in more than six months on Wednesday evening,...

Next Trump-Biden debate rules to change, with possible a mic mute, after an ugly first round

Facebook will ban ads that seek to delegitimize US election