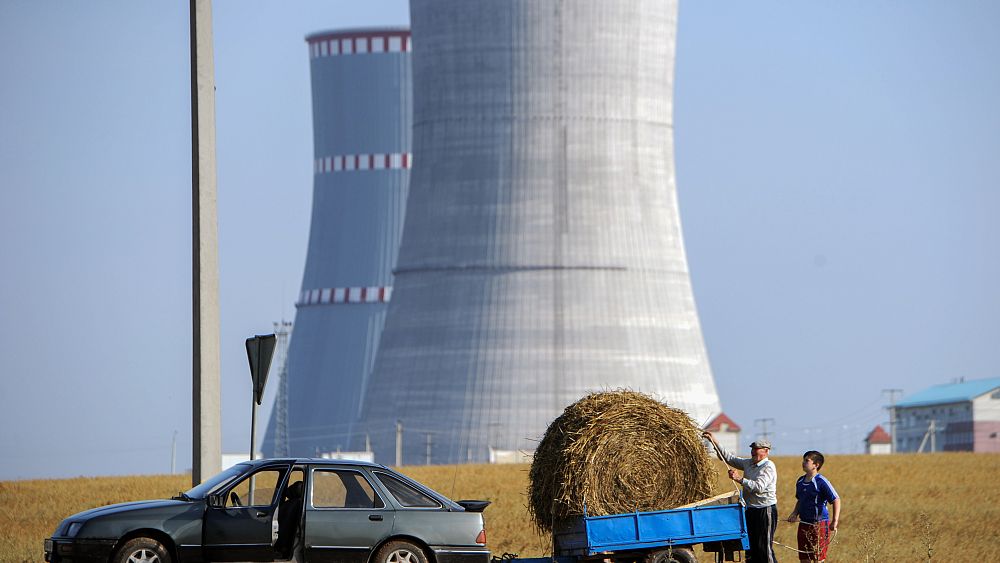 Europe could pay a heavy price if Belarus is not stopped from firing up its first nuclear plant, Lithuania’s ex-energy minister has told Euronews.

The facility at Ostrovets – also called Astravyets – lies just 45 kilometres from the Lithuanian capital Vilnius and is set to go online in July.

It’s Belarus’ first nuclear plant and comes 34 years after the Chernobyl nuclear disaster in Ukraine caused havoc in the south of the country.

While France has dozens of nuclear reactors, many countries, including Germany, have pledged to phase theirs out. The amount of electricity generated by nuclear in the EU dropped from around 45% in 2006 to 28% in 2018.

For Belarus, it’s a source of pride. The 2.4-GW power plant — built with Russian money and supervision — will lessen that nation’s dependence on Moscow for energy.

Ostrovets Unit 1 reactor is expected to go online in July, while the near-identical Ostrovets 2 is set for a sign-off in the fall.

But, since the outset of the project in 2011, Lithuania has been vehemently against it. Vilnius claims it is a geopolitical scheme spearheaded by Russia to keep Lithuania quiet and keep Belarus on a tighter lead.

“The plant is being built in breach of safety standards, including the UN’s Espoo and Aarhus conventions,” Arvydas Sekmokas, Lithuania’s former energy minister, told Euronews.

“Minsk has disregarded International Atomic Energy Agency (IAEA) recommendations made after the Fukushima disaster that plants should not be built within 100 kilometres of major population centres.

“I still believe that we still can halt the project. Otherwise, not only Lithuania but all of Europe can pay a heavy price for it.

“The world knows very well the praise-worthy stories of Austria and Sweden, which shut down their nuclear plants after they were already built.”

Lithuania has held drills to prepare for a nuclear emergency. Vilnius, with a population of more than half a million people, would have to be evacuated in the worst-case scenario of an accident at Ostrovets.

Lithuania’s foreign minister, Linas Linkevicius, said the country and the EU “must work together” to not only ensure the impeccable safety of the plant but also to maintain the freedom and independence of Belarus.

“The construction of the Ostrovets NPP is contrary to economic logic,” he told Euronews. “Russia has foisted the project on Belarus. It imposes a huge economic burden on the country and increases its dependence on Russia.”

In one last-ditch attempt to thwart the firing up of Ostrovets this summer, Linkevicius spoke to US Deputy Secretary of State Stephen Biegun, requesting US support for Lithuania’s position on the nuclear plant.

“Such conversations with high-ranking US officials are ongoing constantly,” said Linkevicius. “The US Secretary of State, Mike Pompeo, noted during his visit to Minsk in early February that Belarus’ reliance on Russia is increasing.”

But Belarus shrugs off the notion, claiming the Ostrovets is an economic necessity and has nothing to do with geopolitics.

Belarus’ deputy energy minister, Mikhail Mikhadyuk, told Euronews that the security of the plant is of “utmost importance” and that Belarusian efforts in this regard have drawn positive feedback from the International Atomic Energy Agency (IAEA) and other international nuclear energy watchdogs.

“The position that Lithuania has taken towards the project is absolutely unsubstantiated, it is all about politicising,” said Mikhadyuk.

“Let us remind everyone that, years ago, Lithuania pursued ownership of a nuclear power plant, but failed to execute it

“A number of EU member states are implementing nuclear power projects that are analogous to ours.”

Although Lithuania remains unabashed in its quest, some local energy experts, like Vidmantas Jankauskas, former chief of Lithuania’s National Commission for Energy Control and Prices (VKEKK), believe the ship has already sailed.

“Instead of turning the page and trying to work out a mutually accepted set of rules with Belarus as far as the operation of the Ostrovets facility is concerned, we continue making noise with nobody paying much attention to it,” the analyst said.

Jankauskas also slammed the former Lithuanian energy minister’s remarks on closures of the Austrian and Swedish nuclear power plants being an example for Lithuania.

“He told a half-truth,” he said. “Sweden has closed its Barseback nuclear plant 25 years after its successful operation when Swedes finally voted to stop using atomic energy,” Jankauskas noted.

Barseback lies just across the Baltic Sea from Copenhagen.

“As for the Zwentendorf Nuclear Power Plant near Vienna, it is indeed the only reactor in the world which has been completely built, but mothballed before it was ever put into operation,” he said.

“But Austria is one story and Belarus is another one – with a completely different mindset and energy situation.”

That the EU and the US, both enjoying improved relations with Belarus, have not turned much of an ear to Lithuania’s complaints is not coincidental, the expert believes.

“To say that they are closing their eyes to some things in Belarus would be audacious, but the reality is different – they want Belarus to be in the loop, not outside it,” Jankauskas said.

Is the Belarusian nuclear facility safe?

Approached by Euronews, the IAEA Press Office circumvented the question, referring to the agency’s press releases, posted on the IAEA website after the visits of IAEA teams to Ostrovets. The press releases noted a “commitment” by Belarus to strengthen safety ahead of the start of commercial operations of its Unit 1 and lauded the people behind the project.

Milko Kovachev, the IAEA team leader and head of its nuclear infrastructure development section, is quoted in a March 4 IAEA press release: “We met well-prepared, motivated and competent professionals ready to openly discuss all infrastructure issues. The team saw a clear drive to meet the objectives of the programme and deliver benefits to the Belarusian people, such as supporting the country’s economic development.”

Lithuania keeps questioning the transparency and security of the Belarusian project. Sekmokas even ponders whether the IAEA has “in a way” plotted against Lithuania.

“As a country implementing various nuclear power projects, Russia plays the first fiddle in the organisation,” he claimed. “Indeed, Russia is a big power to reckon with internationally when it comes to building new nuclear power plants. Namely, Russia is building most of them now,” Jankauskas agreed.

After nuclear fuel was delivered to Ostrovets in early May without an agreement on early notification of a nuclear accident between Vilnius and Minsk, Lithuania’s energy minister, Zygimantas Vaiciunas, sent a letter to IAEA director-general Rafael Grossi, reminding him that, despite several IAEA missions to Belarus, Minsk refuses to publish the organisation’s full reports and Belarus’ progress in implementing safety recommendations raises questions.

Lithuania is also concerned Belarus has “unaddressed” deficiencies at the plant, red-flagged by a European peer-review team consisting of EU and non-EU experts in the summer of 2018. Although it concluded that the Belarusian nuclear power plant has “generally” met the requirements of a European Union “stress test” designed to avert repeats of the 2011 Fukushima disaster. Yet the thorniest issue of the site — being less than 50 kilometres from the Lithuanian capital — was not addressed in the test.

“Trust in nuclear energy and the IAEA now depends exclusively on the agency’s actions and its proper response to the intolerable situation in Belarus,” said Vaiciunas.

However, with the launch of Ostrovets seeming imminent, Linkevicius is hesitant about the timing.

“Considering the COVID-19 impact and the economic difficulties that Belarus is grappling with, the date of the plant’s kick-off seems more conditional and may be subject to further corrections,” he said.

“Lithuania will continue its efforts aimed at ensuring uncompromised safety of the Belarus plant for its own sake and for the sake of the international community,” the minister underscored.

Concert of the decade? How and when to watch One World: Together At Home for coronavirus aid

Coronavirus tracing apps: is privacy protection to blame for few downloads in the EU?

Coronavirus: Hard-hit Sweden admits it could have battled COVID-19 better

With elementary and high school around the world attending school virtually this fall, hotels are selling an unlikely travel opportunity — the "schoolcation."Families are being enticed from their homes by hotels promising a change of scenery alongside tutoring, round-the-clock tech help and after-school activities that are more fun than what's available...

BEIJING – Luxury and electric vehicles emerged as bright spots at this year's Beijing Auto Show, which kicked off this...

Chinese battery and electric vehicle maker BYD shows off a model of its Han EV series at the 2020 Beijing...