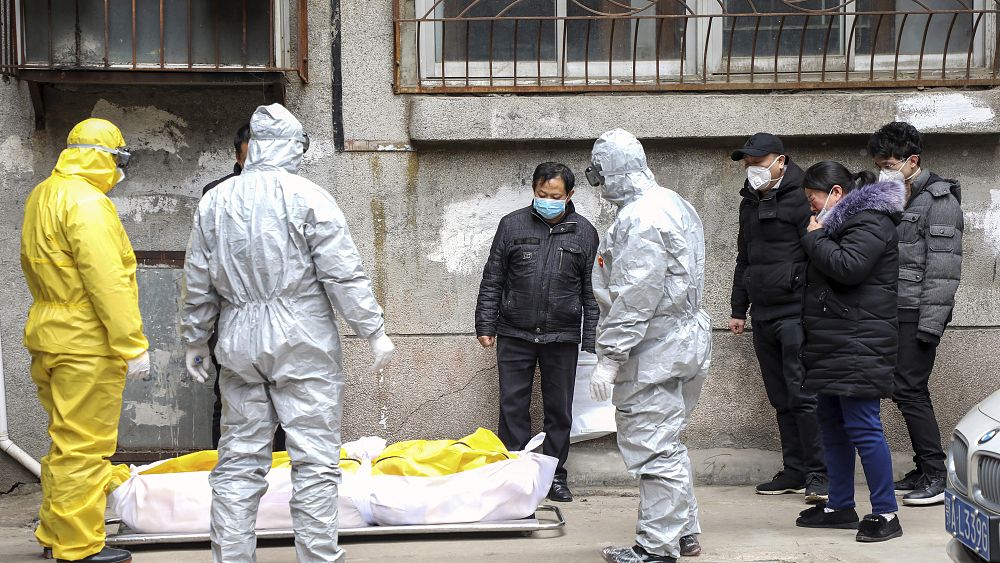 The Chinese government has denied any “cover-up” over official COVID-19 casualty figures after a sudden increase in the number of deaths was revealed.

“There’s never been any cover-up and we will never authorise any cover-up,” foreign ministry spokesman Zhao Lijian told reporters on Friday.

The denial comes amid fresh criticism of China from some Western leaders — including French President Emmanuel Macron — who have questioned the accuracy of Beijing’s statistics and transparency.

New figures show there have been nearly 1,300 extra deaths in Wuhan. The city at the origin of the coronavirus outbreak has sharply raised its number of COVID-19 fatalities by 1,290 to make a new total of 3,869.

This represents the majority of all deaths in China, whose official death toll nationwide stands at 4,632 as of Friday (April 17).

An official communique says the new figures are explained by the number of people who died at home, and didn’t show up at first in official reports.

Macron: ‘Don’t be naive’ over China

Both the French President and the UK’s stand-in leader have criticised China in separate comments about Beijing’s response to the coronavirus outbreak in Wuhan.

“Given these differences, the choices made and what China is today, which I respect, let’s not be so naive as to say it’s been much better at handling this,” the French president said. “We don’t know. There are clearly things that have happened that we don’t know about.”

Britain’s Foreign Secretary Dominic Raab said on Thursday that China had questions to answer, adding that a review of the crisis was needed, including over how the outbreak came about.

“There’s no doubt we can’t have business as usual after this crisis and we’ll have to ask the hard questions about how it came about and how it couldn’t have been stopped earlier,” he said at the daily UK government briefing.

Beijing responded on Friday, saying it was “pointless” to argue over the pros and cons of different political systems.

“It’s imperative that all countries unite to combat the epidemic and win the war” against COVID-19, said foreign ministry spokesman Zhao Lijian.

The accuracy of China’s reporting of its coronavirus casualty figures has long been called into question. Officials have been accused of trying to minimise the impact of the outbreak.

Watch live: COVID-19 survivors discuss their battles with the disease

Rajan Raghuram at Jackson Hole, Wyoming August 24, 2018. David A. Grogan | CNBCLONDON — The "jury is still out" on negative interest rates as central banks search for ways to shore up the global economy from the long-term effects of the coronavirus pandemic, according to former Reserve Bank of India...

Stocks rose on Tuesday as a deadline for a new fiscal stimulus deal from Washington approached. The Dow Jones Industrial...

The coronavirus pandemic has disrupted the global economy and put millions of jobs on the line in the process. With...

The U.A.E. delegation landed Tuesday at Israel's Ben Gurion Airport to sign a slew of agreements that included aviation, science...

With two weeks until Election Day, more than 34 million Americans have already voted in the 2020 presidential election, according to data updated Tuesday morning by the U.S. Elections Project.Votes cast by mail and in person this election cycle have now reached 24.5% of the more than 136 million total...

Satya Nadella, CEO of MicrosoftCNBCMicrosoft has stated repeatedly said it's committed to boosting diversity. Now the company has strengthened that...

Brussels says planting three billion trees will help save the planet. Experts aren’t so sure…