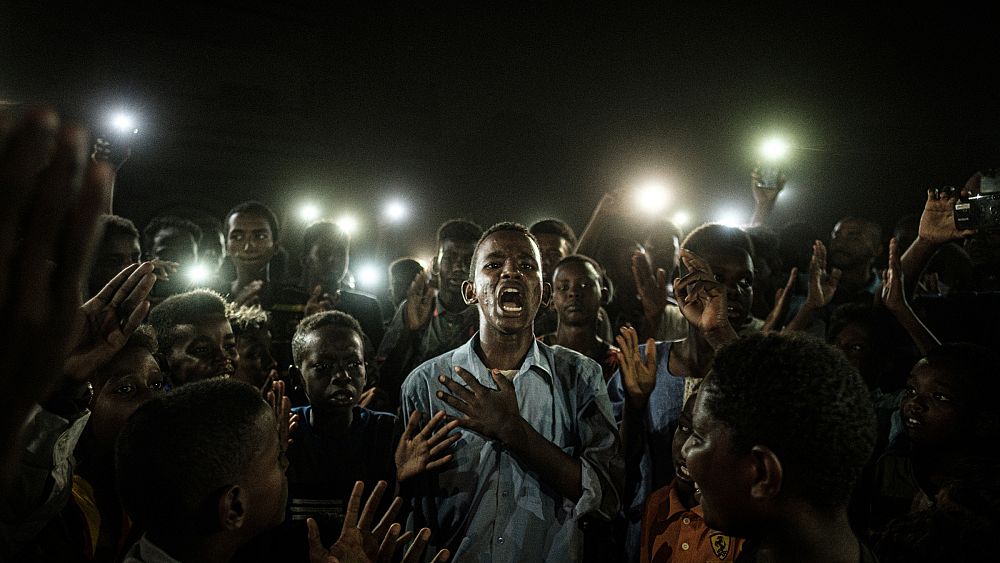 These are the winners from this year’s World Press Photo competition, which rewards the best in visual journalism.

Yasuyoshi Chiba is a photographer from Agence France-Presse news agency, who resides in Nairobi, Kenya.

His winning photograph is taken in Sudan amid protests last year over the country’s transitional military government.

It was established after President Omar al-Bashir was ousted after decades in power.

World Press Photo Story of the Year: ‘Kho, the Genesis of a Revolt’ by Romain Laurendeau

Romain Laurendeau’s work is about young people in Algeria joining protests against the reign of long-time president Abdelaziz Bouteflika.

“The winning series tells the story of the deep unease of Algerian youth, who, by daring to challenge authority, inspired the rest of the population to join their action, giving birth to the largest protest movement in Algeria in decades,” said World Press Photo.

Young people make up more than half of Algeria’s population, and, according to a UNESCO report, 72 per cent of those under 30 are unemployed.

First prize in Contemporary Issues (singles): ‘Nothing Personal – the Back Office of War’ by Nikita Teryoshin

Russian photographer Nikita Teryoshin wins for his photo from one of the biggest arms trade fairs in the world: at the International Defence Exhibition and Conference in Abu Dhabi, UAE.

Lorenzo Tugnoli from Italy is awarded for his work for the Washington Post on the conflict in Afghanistan. The Taliban made significant territorial gains and increased its influence in the country in 2019. The Institute for Peace and Economics’ report, published in April last year has called Afghanistan the world’s “least peaceful” country, replacing Syria.

Esther Horvath’s work for The New York Times focuses on covering the work of scientists in the Arctic. Its harbours have some of the fastest-retreating sea ice on the planet and twice the average global heating rate. The two polar bears are photographed near the Polarstern, a ship specially designed to withstand extremely low temperatures and breakthrough thicker ice, enabling around 100 researchers and crew to work all year round to collect highly important data about this ecosystem.

On his assignment for National Geographic, Luca Locatelli’s investigated how farmers, manufacturers and governments across the globe are taking steps to implement a circular economy as part of their efforts to address the climate crisis. This type of economy offers an alternative to a take-make-waste linear one by decoupling economic activity from the consumption of finite resources. It is based on designing waste and pollution out of the system, keeping products and materials in use, and regenerating natural resources.

Nicolas Asfouri from Agence France-Presse news agency was recognised for his work on anti-government protests in Hong Kong.

Alain Schroeder won with his work on orangutans who live on just two islands in the world, Sumatra and Borneo. They are being forced out of their natural rainforest habitat as palm oil plantations, logging and mining proliferate.

The mother of this baby orangutan was found totally blind, with a broken clavicle and 74 air-gun wounds. She had been shot at by villagers after eating fruit from their orchards.

Schroeder also won with his multi-image story on orangutans. It focuses on those who try to save the animals which are under severe threat from the ongoing depletion of the rainforest. Organisations such as the Sumatran Orangutan Conservation Programme care for lost, injured and captive orangutans, aiming to reintroduce them into the wild.

When Ewa fell ill, her family were applying for asylum in Sweden and being threatened with deportation to Poland, which had been their country of first arrival as refugees. They feared being sent back to Armenia. The family was deported to Poland, despite Ewa’s illness, but she recovered eight months after they arrived.

Adam Ferguson won with posed portraits of displaced Yazidi people and other minorities who had suffered human rights violations perpetrated by ISIS, in camps for displaced people in northern Iraq.

First prize in Spot News category (singles): ‘Clash with the Police During an Anti-Government Demonstration’ by Farouk Batiche

Farouk Batiche followed the protests in Algeria that started in February 2019. Initially, they aimed at ousting long-time president, Abdelaziz Bouteflika. After his resignation, protests continued into 2020 demanding the departure of government officials associated with his administration.

Ethiopian Airlines Flight ET302, a Boeing 737 MAX, crashed not far from Addis Ababa six minutes after take-off, killing 157 people on board. A week after the crash, empty coffins were buried at a ceremony at the Holy Trinity Cathedral in Addis Ababa, as victims could not be identified. Officials gave relatives bags of earth from the crash site. Mulugeta Ayene from Associated Press documented their morning.

House Speaker Nancy Pelosi eviscerated the Trump administration on Monday as Washington fails to send more relief to Americans during a record spike in coronavirus cases.The California Democrat's biting letter to House Democrats came only minutes before a nearly hour-long conversation with Treasury Secretary Steven Mnuchin that appeared to yield...

Stock market turbulence could last until the election, followed by a relief rally, strategists say

A trader walks by the New York Stock Exchange.Spencer Platt | Getty ImagesThe stock market turbulence could be a setup...

WASHINGTON—The Trump administration on Monday imposed counterterror sanctions on Iran’s Ministry of Petroleum, the National Iranian Oil Company and its...

U.S. House Speaker Nancy Pelosi speaks during a press conference on Capitol Hill in Washington, D.C., the United States, on...

Industrials lead market sell-off, but these stocks could be about to bounce back