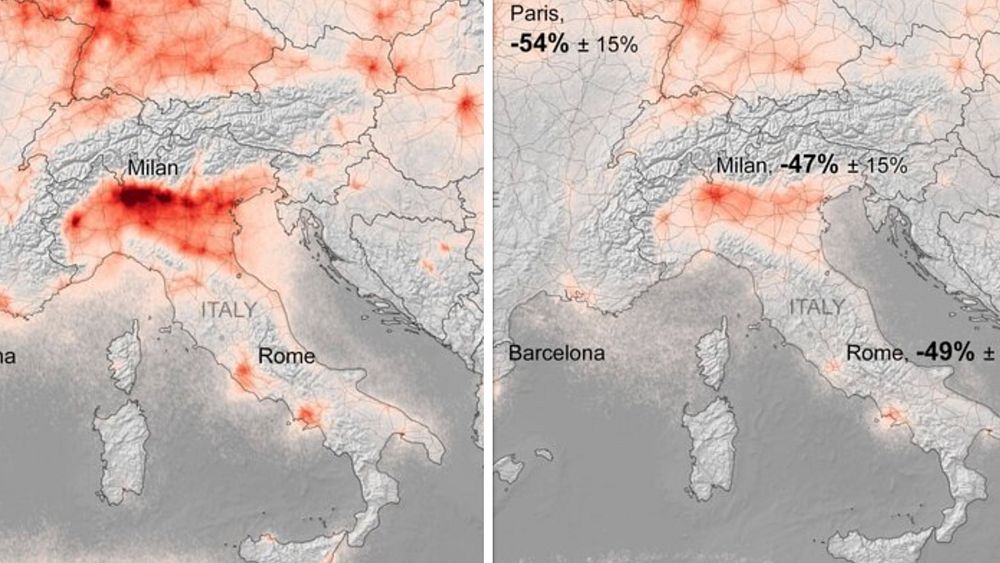 Air pollution has plummeted by more than 45% compared to 2019 values in some European cities as coronavirus restriction measures have kept people at home.

Paris, for instance, saw nitrogen dioxide levels drop by 54%, according to research that was released by the Royal Netherlands Meteorological Institute (KNMI).

Scientists at the Dutch Institute, using the European Space Agency’s Copernicus Tropomi instrument, compared nitrogen dioxide concentrations from March 13 until April 13 2020 to those in 2019 during the same period.

They found similar decreases in cities across the bloc, with Madrid, Milan, and Rome reporting a drop of around 45%.

There is a significant margin of error of 15% with regard to these calculations, which can be attributed largely to varying weather conditions and vast fluctuations in the daily rate of nitrogen dioxide. Thus, they calculated an average of concentrations over a 15-day period.

“Averaging data over longer periods of time allows us to see clearer changes in concentrations owing to human activity. For this reason, the maps show concentrations over a monthly period and are provided with an uncertainty of 15% which reflects weather variability not accounted for in the monthly averages used,” Henk Eskes, a scientist at KNMI said.

Nitrogen dioxide is a pollutant that is produced by industrial activity, such as road and air travel.

It can have significant health impacts: the World Health Organisation (WHO) estimates that ambient air pollution contributed to over 7% of pre-mature deaths globally in 2016.

Rivals groups fight over mayoral office ahead of Bolivian election

Lebanon riots: Protesters face off against police after funeral

Stocks fell on Friday, with Wall Street set to wrap up a difficult week as U.S. fiscal stimulus talks broke down, coronavirus cases rose and a slew of companies reported quarterly earnings. The Dow Jones Industrial Average traded 400 points lower, or more than 1%. The S&P 500 dipped 1.7%...

MEXICO CITY—Mexico’s economy picked up sharply in the third quarter, led by a rebound in industrial production as businesses reopened...

Bill Morneau, the former Canadian finance minister, speaking at a debate at the International Monetary Fund (IMF) and World Bank...

Covid-19 has thrown the gym industry into a tailspin, wreaking havoc on some of the biggest names in fitness including Gold's Gym and 24 Hour Fitness, which both had to file for bankruptcy protection.   Planet Fitness also has had to shut its doors for months but unlike its rivals, the company...

Dr. Scott Gottlieb on Friday urged Americans to adhere to coronavirus safety precautions in the next few months, warning the nation's uptick...

Shares of Twitter, Facebook, Apple and Amazon traded lower Friday, a day after the companies released quarterly reports that failed...

U.S. Treasury yields were little changed on Friday as investors remained on edge about the rising daily new coronavirus cases...

Can Anyone But Justin Bieber and Brad Pitt Make Frosted Tips Look Good?

Hungary to get coronavirus vaccine in winter, says Orbán