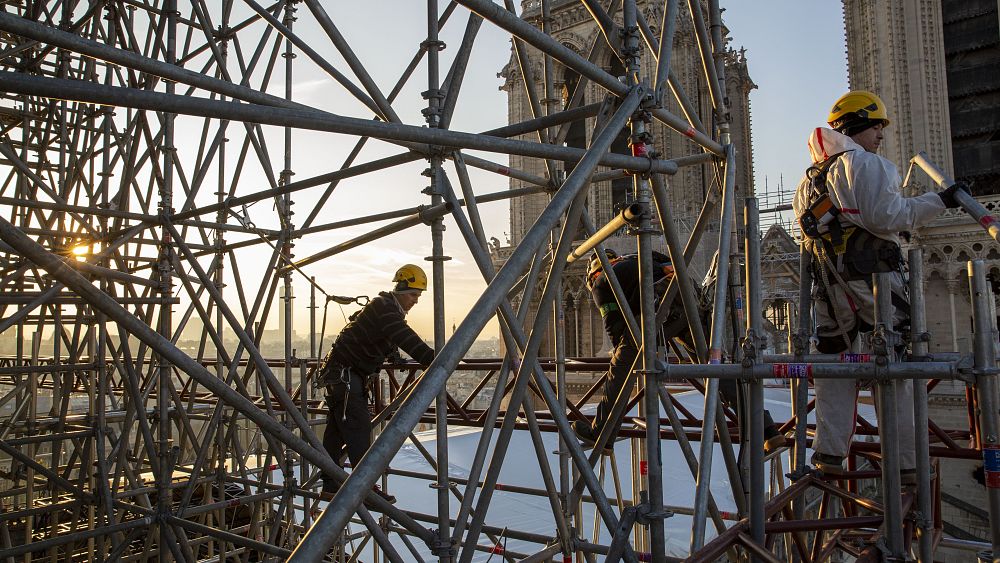 On April 15, 2019, flames engulfed Notre-Dame Cathedral in Paris, destroying its roof, toppling its spire and leaving millions of people across the globe devastated.

Donations quickly flooded in to help restore the world’s most famous gothic landmark, work that has now had to be halted due to the coronavirus pandemic.

The restoration is being managed by construction experts Pierrenoel, alongside specialist scaffold and rigging companies. Pierrenoel’s president, Didier Durand, spoke to Euronews about how the project was progressing prior to the lockdown.

Durand described Notre-Dame as “both the most beautiful and the most observed building site in the world today.”

One of the main consequences of the fire was the loss in structural stability in the cathedral due to the collapse of its roof, Durand said. The limestone absorbed water used in extinguishing the fire, while some of the stonework has been damaged by the flames.

Much work has had to be done to ensure that other parts of the building do not collapse, including removing the statues that were taken down from the north, south and west gables.

Chimeras and balustrades which were at risk of falling onto the vaulted ceiling were removed from the south and west corners of the south tower where the stonework was badly damaged by the fire.

Climbers had to assess the damage to some of Notre Dames gargoyles, chimeras and sculptures by scaling the building.

No further damage to the cathedral walls

To avoid having to drill holes in the medieval walls of the building, granite footings and brick piles were installed so that parts of the cathedral could be restored.

Chief architect Philippe Villeneuve has stressed that the building’s eighth-century walls – which have survived many renovations and modifications over the years – should not suffer any damage during the project.

The robots have helped technicians clean the rubble inside Notre-Dame due to the risk of further collapse.

All the remaining debris – mainly wood, metal, stone and gravel – was carefully checked and marked by experts before it was removed from site, Durand explained

The analysis of the debris is twofold: to help understand what started the fire – believed to be a faulty electrical circuit – and to understand how the cathedral was built eight centuries ago.

The cathedral has been reinforced and supported with wooden decking between the gutter walls.

Twenty-eight temporary wooden bracings were built under Notre-Dame’s iconic flying buttresses, which are a form of structural support that is common in Gothic architecture.

Scaffolding was constructed to access the parts of the cathedral that needed to be dismantled or repaired.

Climbers have helped to keep water out of the cathedral by erecting semi-transparent tarpaulins above the building and over the windows after the stained glass was removed by specialists.

The biggest challenge to come

“One of the biggest challenges so far is to resolve the problem of the scaffolding that had been installed to restore the building’s spire, and was damaged during the blaze,” Durand said.

So far, teams have managed to reinforce the scaffolding, a necessary step in the process of dismantling it.

In the next few months, when work will resume, the scaffolding will be cut, tube by tube, and lowered to the ground.

The riggers will then collect the tubes – 250,000 of them – while being suspended from large beams.

In parallel to the scaffolding removal, other teams will work at night to remove the debris from the top of the cathedrals vaulted ceiling. This includes charred remains of the wooden frame and lead from the roof which melted during the fire.

“In parallel to the scaffolding removal, other teams will work at night to remove the debris from the top of the cathedrals vaulted ceiling. This includes charred remains of the wooden frame and lead from the roof which melted during the fire,” Durand said.

All the remaining stone vaults will have to be reinforced, because 15% of them collapsed when the spire fell. An investigation has been carried out by the chief architect with the help of specialists to identify parts of the vaults which need to be consolidated from above. When this work is complete workers will be able to safely go into the building to start the restoration on the internal stonework.

All of the remains removed from the top of the cathedral’s vaulted ceiling as well as others from different parts of the building are sorted in the large tents at the foot of Notre-Dame.

“The Laboratory of Historical Monuments specialists are present to identify, analyse and catalogue all of the items so that they can be put back in the correct location,” Durand explained.

The fire in April 2019 released hundreds of tons of lead into the air, contaminating the site and surrounding area.

As a result, the work of many specialists on site had to be occasionally postponed due to the concerns about lead concentration, and measures have been taken to protect everyone on the construction site, including special masks and suits and onsite showers.

Tests will be carried out to define the best plan to clean and restore as much as possible in the interior of Notre-Dame, much of it in laboratories outside the cathedral.

Scientists are using the recovered objects as key clues to find the best and the safest way to restore the cathedral.

Soon after the fire, a public body was created by French president Emmanuel Macron and headed by retired military general Jean-Louis Georgelin, appointed to oversee the restoration project.

Georgelin said the plan was to open the cathedral on the 15 April, 2024, with a service, but the five year time-frame for restoration seems ambitious to some experts.

Considering the coronavirus outbreak, meeting that deadline may turn into a battle against time.

More protests erupt in Atlanta, US, after man shot dead

A voter arrives to drop off he ballot during early voting in Allentown, Pennsylvania on October 29, 2020.Angela Weiss | AFP | Getty ImagesIranian hackers have been targeting U.S. state government websites in "an intentional effort to influence and interfere with the 2020 U.S. presidential election," the FBI and the...

KAMPALA, Uganda—A U.S.-brokered peace deal with Israel has deepened rifts in Sudan’s fragile transitional government, divisions that are set to...

A man shows AirPods Pro at an Apple store on East Nanjing Road on October 30, 2019 in Shanghai, China....

Some technology stocks that have staged big gains because of the coronavirus pandemic got a little less expensive this week.The...

Water floods streets of Greek island of Samos after earthquake