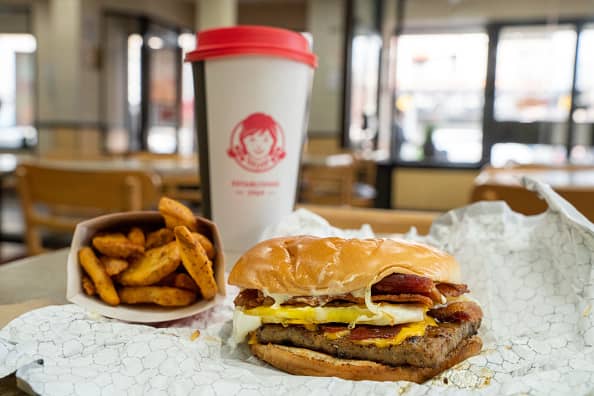 The Breakfast Baconator and Seasoned Potatoes are part of the breakfast menu at Wendy’s restaurants on March 2, 2020 in New York City.

Wendy’s on Thursday announced measures to support its franchisees and its own liquidity as the coronavirus pandemic drives down its same-store sales by 20%.

The burger chain launched its breakfast nationwide for the first time on March 2. That week, breakfast sales rose about 15%. Breakfast represented a big initiative for the company, which invested about $20 million in 2019 to support the launch in U.S. restaurants. Wendy’s anticipated that breakfast sales would eventually grow to at least 10% of its total daily sales.

Citing the launch’s strong early performance, the company intends to stop advertising that is only focused on breakfast and instead support franchisees in other ways. Wendy’s was originally planning on spending between $70 million to $80 million in 2020 promoting the breakfast menu.

To support its franchisees, Wendy’s is extending payments for royalties and marketing funds by 45 days for the next three months. Franchisees who rent property from Wendy’s will have their base rent payments deferred by 50% over the same period. Franchisees will also have an extra year to renovate their restaurants and fulfill new restaurant development requirements.

The company has fully drawn down its revolving financing facility and suspended its buyback program. Including the draw down of $120 million, Wendy’s has about $340 million in cash.

Watch now: ETF Edge on what’s going on with bond ETFs and levered funds amid sell-off

Digital nomads can now work remotely in the Cayman Islands for up to two years.The catch? Those workers must make at least $100,000 a year — and even more if they want to bring a companion.Launched on Oct. 21, the Global Citizen Concierge Program invites high-earning workers to ride out...

Asia will be ‘resilient’ in a coronavirus second wave. Here’s how to invest, says Credit Suisse

As parts of the world brace for a second wave of Covid-19 infections, the economic impact on Asia will likely...

India could contribute up to 20% of Amazon’s growth in next 5 years, tech investor Gene Munster says

SINGAPORE — India is a small contributor to Amazon's total sales right now, but the country may become an important...

An employee of the Internet company Facebook walks through the courtyard of the company campus in Menlo Park, California.Christoph Dernbach | picture alliance | Getty ImagesPolitical advertisers say they're having trouble with ads that were already approved before Facebook began its planned blackout period for new political ads leading up...

Steve Huffman CEO, Reddit, delivers remarks on 'Redesigning Reddit' during the third day of Web Summit in Altice Arena on...

Why Erdoğan’s attacks on France will backfire

How the race to inherit Merkel’s mantle got dirty