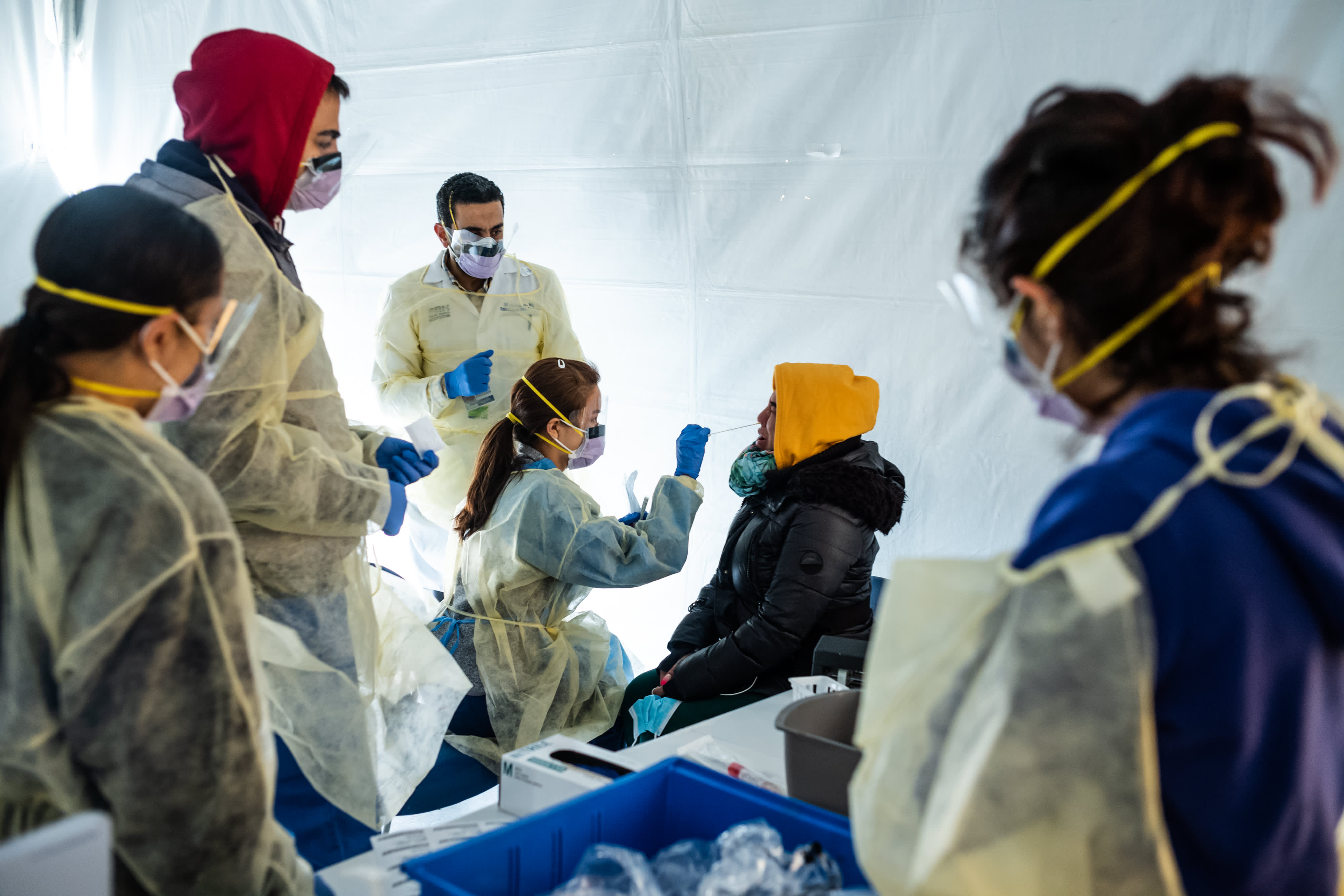 This is CNBC’s live blog covering all the latest news on the coronavirus outbreak. All times below are in Eastern time. This blog will be updated throughout the day as the news breaks.

The data above was compiled by Johns Hopkins University.

Gov. Andrew Cuomo plans to close some streets in New York City and may close parks and playgrounds to contain the coronavirus outbreak by reducing density.

State and local officials are taking a tougher stance because city residents aren’t following the state’s guidance encouraging people to maintain a distance of at least six feet from each other, which he said was “effective and necessary” to slow hospitalization rates.

Steven DeAngelo has seen it all. As the so-called “father of the legal cannabis industry,” he co-founded one of the largest vertically integrated licensed cannabis businesses in California, called Harborside, with four stores and $60 million in annual revenues.

But what’s happened in the last month is something new. “We had our largest sales day ever,” he says. “Sales are up 20-25% at all locations.”

Across the country, sales are sky-high in states where legal cannabis has been declared “essential medicine” during state shutdowns, allowing stores to stay open. —Jane Wells

11:31 am: Which countries are flattening the curve?

BMW announced that it plans to close its plant in Spartanburg, South Carolina, through April 12. The plant is the company’s largest in the world by volume, producing over 411,600 vehicles in 2019 and employing over 11,000 people.

BMW said the move was sooner than anticipated due to shelter-in-place orders in individual states and will adjust its plans as circumstances dictate. – Noah Higgins-Dunn, Phil LeBeau

Amazon may be the ultimate beneficiary in the post-coronavirus world, CNBC’s Jim Cramer said, suggesting the company’s cloud unit and e-commerce business are both positioned nicely to thrive.

“I think Amazon could go to $3,000 in this market,” Cramer said on “Squawk on the Street.” That would represent a more than 37% increase over last month’s all-time high.

Since its Feb. 11 record, Amazon has dropped 11% as of Tuesday’s close of $1,940 per share. While lower, the stock has held up much better than that S&P 500, which has seen a nearly 28% decline from last month’s highs. —Kevin Stankiewicz

11:12 am: Negative rates come to the US: 1-month and 3-month Treasury bill yields are now negative

The coronavirus crisis has brought another first to U.S. financial markets — negative yields on government debt.

Yields on both the one-month and three-month Treasury bills dipped below zero, a week and a half after the Federal Reserve cuts its benchmark rate to near-zero and as investors have flocked to the safety of fixed income amid general market turmoil. —Jeff Cox

11:03 am: US auto sales expected to fall at least 15% this year due to the coronavirus

This photo taken on March 23, 2020 shows employees eating during lunch break at an auto plant of Dongfeng Honda in Wuhan in China’s central Hubei province.

U.S. auto sales are expected to fall at least 15% this year as the country implements more aggressive restrictions to prevent the spread of the coronavirus, threatening an already-stressed autos industry, according to new research from IHS Markit.

The COVID-19 pandemic that has spread to nearly every country on the globe has forced a number of governments to implement drastic measures to slow its spread. This has posed the single biggest risk factor for the autos industry in years as consumer demand stalls, according to IHS Markit.

IHS Markit forecasts 2020 U.S. auto sales to be 14.4 million units, down by at least 15.3% year-over-year. The global auto sales forecast is expected to decline more than 12% from last year to 78.8 million units, according to IHS Markit, which would be a larger decline than the 8% drop during the Great Recession a decade ago. —Noah Higgins-Dunn

10:12 am: Putin, citing coronavirus, postpones vote on changes that could extend his rule

Russian President Vladimir Putin on Wednesday said he was postponing a nationwide vote on constitutional changes that would allow him to extend his rule due to the worsening situation with coronavirus.

The vote, on changes that include scrapping a constitutional ban on Putin running again for president in 2024, had been planned for April 22.

Putin did not name a new date for the vote, saying only that he and others would evaluate the situation to decide when the time for a new vote was right. —Reuters

COVID-19 has killed 192 people in New York City, according to Johns Hopkins University, but Gottlieb said that number will rise if the hospitals become overwhelmed.

“New York City hospitals right now are on the brink of what I would call being maxed out in terms of their available capacity,” he said on “Squawk Box.” “New York has another about five weeks to go for this between now and when they’re going to reach peak hospitalizations, so the fact that they’re stretched right now is worrisome.” —William Feuer

9:37 am: Almost half NYC’s coronavirus patients are under 45

Almost half, 48%, of New York City’s 15,597 coronavirus cases are under 45 years old. But an overwhelming majority of those patients are surviving, accounting for just 3% of the city’s 192 COVID-19 fatalities, according to new data from the NYC Health Department.

Parents can take comfort in this stat: zero kids have died. Children under 18 make up just 2% of the city’s cases. Men appear to be disproportionately affected, making up 56% of the cases and 61% of the deaths. The biggest outbreaks in the city are in Queens where 30% of the cases are concentrated, followed by Brooklyn, which has 28% of the cases. —Dawn Kopecki

9:29 am: Nine European countries say it is time for ‘corona bonds’ as virus death toll rises

Corona bonds are a controversial issue that has been dividing the 27-country region. Conservative policymakers in countries such as Germany, the Netherlands and Austria are often wary of the idea of issuing debt together with highly indebted nations, such as Italy, Greece and Portugal. —Silvia Amaro

9:11 am: Gottlieb: Coronavirus fatality rates could increase if hospitals get overwhelmed

Dr. Scott Gottlieb, member of the boards of Pfizer and biotech company Illumina and former FDA commissioner, joins “Squawk Box” to discuss the latest on mitigating the spread of coronavirus in the United States.

8:55 am: Facebook, Microsoft partner with WHO for coronavirus hackathon

The World Health Organization has partnered with Facebook, Microsoft and several other tech companies for a hackathon to promote the development of software to take on challenges related to the coronavirus pandemic.

The #BuildforCOVID19 hackathon was announced on Tuesday and will begin accepting project submissions on Thursday. Along with Facebook and Microsoft, tech companies Twitter, WeChat, TikTok, Pinterest, Slack and Giphy are also participating. The tech companies “will be sharing resources to support participants throughout the submission period.” —Salvador Rodriguez

An increase in interest rates, combined with a massive shutdown of the economy caused homeowners and potential homebuyers to back away from the mortgage market. Total mortgage application volume fell 29.4% last week from the previous week, according to the Mortgage Bankers Association’s seasonally adjusted index.

Applications to refinance a home loan, which had been surging dramatically in the last month, fell 34% for the week but were still 195% higher than a year ago, when rates were 63 basis points higher. Refinances tend to be volatile, moving weekly with interest rates. —Diana Olick

8:23 am: UK intensive care demand could peak within 3 weeks

If Britain’s measures for tackling the coronavirus outbreak work, then intensive care demand will peak in 2.5 to 3 weeks time, a top epidemiologist who advised the government said on Wednesday.

“If, and it’s an if, we’re moderately confident as I’ve said but can’t be completely sure, if the current measures work as we would expect them to then we will see intensive care unit demand peak in approximately two and half to three weeks’ time and then decline thereafter,” Neil Ferguson, a professor of mathematical biology at Imperial College London, told a British parliamentary committee. —Reuters

After almost a day of wrangling, Canada’s House of Commons agreed early Wednesday to approve a $27 billion Canadian ($18.8 billion) stimulus bill to help people and businesses deal with the coronavirus outbreak.

The bill — which also includes CA $55 billion in the form of tax deferrals — must now be approved by the unelected Senate, which will meet later Wednesday. Government officials say they anticipate senators will quickly approve the measures. —Reuters

7:14 am: Trump businesses barred from getting stimulus money, Schumer says

President Donald Trump’s businesses are barred from getting loans or investments under the new $2 trillion coronavirus stimulus deal, according to Senate Minority Leader Chuck Schumer. The Trump Organization, which the president has not divested, is run by his two elder sons, Donald Jr. and Eric.

Democrats and other critics of the president were concerned that Trump’s businesses would receive bailout money because the tourism industry is one of the hardest-hit by the coronavirus, which has spurred leaders to restrict travel and companies to cut capacity and close up shop. The measure will also ban businesses controlled by Vice President Mike Pence, Cabinet members and lawmakers from receiving the funds, according to details circulated by Schumer, D-N.Y. —Mike Calia

7:10 am: Prince Charles, heir to the British throne, tests positive

A file photo dated on January 24, 2020 shows the Prince of Wales, Charles meets Palestinian President Mahmoud Abbas at the presidential palace in Bethlehem, West Bank. Prince Charles, next in line to the British throne, has tested positive for coronavirus.

Britain’s heir to the throne, Prince Charles, has tested positive for the coronavirus, according to a statement from his London household. “He has been displaying mild symptoms but otherwise remains in good health and has been working from home throughout the last few days as usual,” said a statement Wednesday from Clarence House, his residence in the capital. It is not possible to determine how the 71-year-old Prince of Wales contracted the virus, the statement said, “owing to the high number of engagements he carried out in his public role during recent weeks.” —Katrina Bishop, Holly Ellyatt

Target is putting some of its ambitious growth plans on hold. The big-box retailer will put on hold plans to remodel hundreds of stores, postponing openings of new stores and delaying the addition of fresh groceries and beer to curbside pickup. Instead, Target CEO Brian Cornell said the retailer will focus on a singular mission: providing food, medicine and other essential items. He said Target is withdrawing its guidance for the first quarter and fiscal year because of the unpredictable business climate. —Melissa Repko

6:44 am: Surge of cases in Africa prompted decision to cancel Olympics, IOC says

Zambia’s number of confirmed cases rose to 12 from three, President Edgar Lungu said in a televised address. The previous figure had not been updated since March 22, Reuters reported. —Holly Ellyatt

6:30 am: Tokyo governor to ask residents to stay indoors over weekend as cases rise, NHK reports

SINGAPORE — Shares in Japan were set to open lower as investors in Asia-Pacific monitor coronavirus developments.Futures pointed to a...

China’s electric car strategy is starting to go global – and the U.S. is lagging behind

Tesla China-made Model 3 vehicles are seen during a delivery event at its factory in Shanghai, China January 7, 2020.Aly...

Nucor is gearing up to substantially increase its production for the automotive end market as the industry experiences a sales...

New filings for jobless claims in the U.S. totaled 787,000 last week, nearly the lowest total since the early days...

When dogs are more powerful than politicians