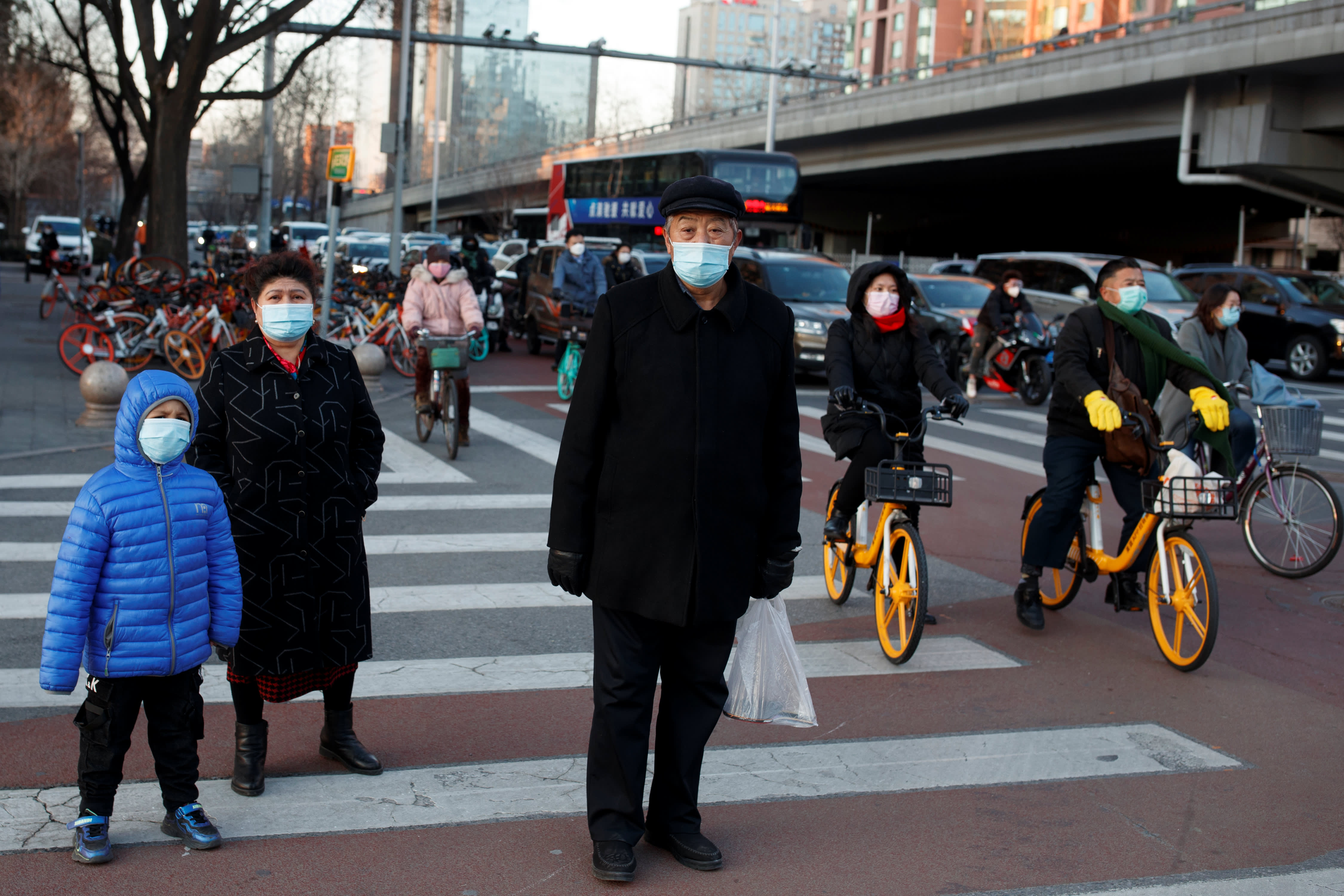 People wear masks as they cross a street during evening rush hour, as the country is hit by an outbreak of the novel coronavirus, in Beijing, China, March 3, 2020.

BEIJING — An early look at Chinese business conditions in March shows little indication the economy has recovered much from the shock of the coronavirus in the first two months of the year, according to the China Beige Book.

The firm conducts an independent survey of more than 3,300 Chinese businesses every quarter. Its primary indicators for the first quarter have fallen to their lowest level in nearly 10 years of tracking China’s economy, according to an early look brief released Tuesday Beijing time.

“Crucially the results continued to deteriorate into mid-March when most firms were re-opening and supposedly ‘back to work,'” the report said. “Nationally, our revenue index plunged to -26 this quarter while profits dove in tandem, to -22.”

COVID-19, which first emerged in late December in the Chinese city of Wuhan, has killed more than 3,200 people in mainland China. While the spread of the virus within the country has stalled, it has since infected hundreds of thousands around the world and killed more than 11,000 people globally. Major parts of the world have restricted travel and locked down cities in an effort to contain the virus, prompting fears of a global recession that has rocked financial markets around the world.

In China, official figures in the last two weeks or so say the largest companies and key businesses have resumed work at a rate close to 80% or 90%, if not higher. However, that of small- and medium-sized companies — which contribute to the majority of growth and jobs in the country — has been lower, at above 60%.

“Output contracted (in March) even more than it had in February, employee workweeks shrank further, and hiring continued to decline despite labor supply shortages worsening,” Shehzad Qazi, managing director at China Beige Book, said in an email on Friday. The larger takeaway is clearly that return to work has not meant return to growth for China (at least not as yet).”

The China Beige Book said it’s “not unreasonable” that gross domestic product will contract 10% to 11% in the first quarter, even with a slight upturn in the last few weeks of this month.

The official unemployment rate for cities, which many analysts doubt, also jumped in February to 6.2% — outside a range it has held for the last two decades.

The China recovery story is no longer just about domestic resilience, but also factors beyond Beijing’s control.

Similarly, the China Beige Book’s first quarter brief found that all eight regions of the country and every sector saw their workforce contract. The analysis noted that the survey results on employment weren’t as bad as expected, especially for small- and medium-sized companies. The report pointed out that the situation could go either way: a “solid reversal” in the second quarter, or a need for much greater government intervention.

In the meantime, many workers were also unable or unwilling to go back to their jobs — the survey found the availability of both skilled and unskilled laborers dropped sharply in the first quarter.

Many economists cut their China growth forecasts for the year following last week’s official announcement of weakness in growth. Beijing-based China International Capital Corporation (CICC) became the latest to do so on Monday, lowering its real GDP growth forecast to 2.6%, down from 6.1% previously.

“The China recovery story is no longer just about domestic resilience, but also factors beyond Beijing’s control,” the China Beige Book report said. “Admitting unprecedented Q1 figures is more sensitive because China may also have to admit to poor Q2 numbers on global weakness. Investors may therefore be severely overestimating the extent of China’s recovery and hence the extent to which China can cushion a global downturn.”

The firm’s preliminary look at China in the first quarter showed the services industry was most affected, with nearly half of businesses expecting a quarter-on-quarter decline of more than 10% in sales volume. Retail and manufacturing were next, with close to a third making the same projection.

The Dow Jones Industrial Average erased earlier gains and turned negative on Thursday to kick off a new month and...

U.S. stocks climbed on Thursday to kick off a new month and quarter as investors monitored progress on lawmakers' negotiations...

Peter Endig | AFP | Getty ImagesAmazon on Thursday released comprehensive data into the spread of the coronavirus among its employees, disclosing for the first time that more than 19,000 workers contracted the virus this year.The company arrived at 19,816 presumed or confirmed Covid-19 cases by looking at data across...

Texas Governor Gregg Abbott speaks to the press after attending the public viewing for George Floyd at the Fountain of...